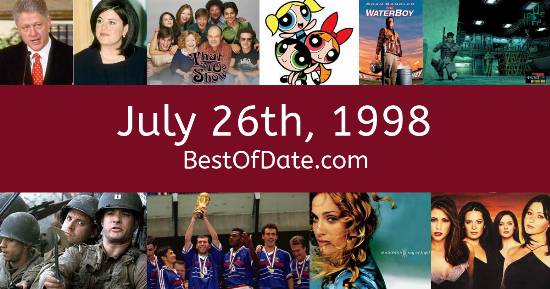 July 26th, 1998 relates to a fictional event in a movie, book, game or television series.

Songs that were on top of the music singles charts in the USA and the United Kingdom on July 26th, 1998.

The date is July 26th, 1998 and it's a Sunday. Anyone born today will have the star sign Leo. Currently, people are enjoying their weekend.

Bill Clinton is currently the President of the United States and the movie Mask of Zorro is at the top of the Box Office. In the United Kingdom, Tony Blair is the current Prime Minister. Meanwhile, in technology news, CDs have become the dominant format for music. People are buying CD players and the portable CD players such as the "Discman". As a result, the older cassette tape format is continuing to decline in sales.

On TV, people are watching popular shows such as "Last of the Summer Wine", "Frasier", "The Nanny" and "Dawson's Creek". Meanwhile, gamers are playing titles such as "Super Mario 64", "GoldenEye 007", "Grand Theft Auto" and "Tenchu: Stealth Assassins". Children and teenagers are currently watching television shows such as "Animaniacs", "Dexter's Laboratory", "Sabrina the Teenage Witch" and "USA High".

Popular toys at the moment include the likes of Polly Pocket, Littlest Pet Shop, the Tamagotchi and Spice Girls dolls.

Bill Clinton was the President of the United States on July 26th, 1998.

Tony Blair was the Prime Minister of the United Kingdom on July 26th, 1998.