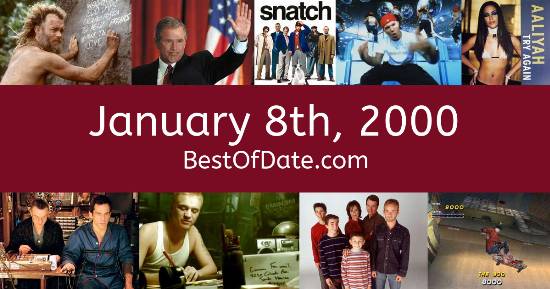 Songs that were on top of the music singles charts in the USA and the United Kingdom on January 8th, 2000.

The movie "Stuart Little" was at the top of the box office on January 8th, 2000.

The date is January 8th, 2000 and it's a Saturday. Anyone born today will have the star sign Capricorn. Currently, people are enjoying their weekend.

The Christmas holiday season is long over, the decorations have been taken down and a sense of normality has returned. In America, the song Smooth by Santana & Rob Thomas is on top of the singles charts. Over in the UK, I Have A Dream / Seasons In The Sun by Westlife is the number one hit song.

Bill Clinton is currently the President of the United States and the movie Stuart Little is at the top of the Box Office. In the United Kingdom, Tony Blair is the current Prime Minister. A relatively new form of communication called "text messaging" is continuing to explode in popularity. Although the technology has been around since the mid-1990s, it was only recently that cell providers started to allow users to send SMS messages to people on different networks.

The Nokia 3210 is currently one of the most popular cell phones on the market. Pokemon has become one of the most popular franchises in the world, as trading cards, toys and handheld games gross over one billion dollars. In technology news, more and more music companies are beginning to release MP3 players. The new MP3 format means that music listeners are able to listen to multiple albums on the go.

It's the year 2000, so the music charts are being dominated by the likes of Christina Aguilera, Faith Hill, Savage Garden, Destiny's Child, Santana, Sisqó, Creed, Aaliyah and Enrique Iglesias. If you were to travel back to this day, notable figures such as Big Pun, Tom Landry, David Tomlinson and Walter Matthau would all be still alive. On TV, people are watching popular shows such as "Last of the Summer Wine", "Beverly Hills, 90210", "The X-Files" and "The King of Queens".

Meanwhile, gamers are playing titles such as "Silent Hill", "Counter-Strike", "Tony Hawk's Pro Skater" and "Age of Empires II: The Age of Kings". Children and teenagers are currently watching television shows such as "Kenan & Kel", "Teletubbies", "CatDog" and "Roswell". Popular toys at the moment include the likes of the PlayStation (PS1), Groovy Girls, the Game Boy Color and the Dreamcast.

If you are looking for some childhood nostalgia, then check out January 8th, 2006 instead.

Bill Clinton was the President of the United States on January 8th, 2000.

Tony Blair was the Prime Minister of the United Kingdom on January 8th, 2000.

Enter your date of birth below to find out how old you were on January 8th, 2000.

Here are some fun statistics about January 8th, 2000.