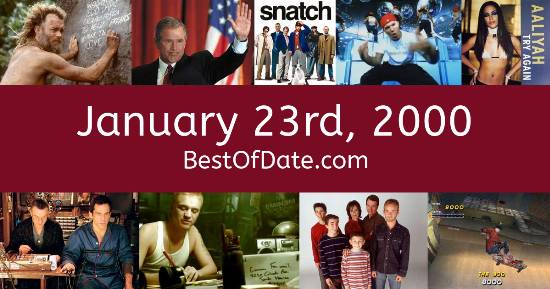 On January 23rd, 2000, the following songs were at the top of the music charts in the USA and the UK.

The top "Box Office" movie on this date was the film "Next Friday".

The following comments about January 23rd, 2000 were written by our visitors.

Have a nice day!

23 years since the Cactus Jack and Triple H fight 😕 I remember watching a recording of the fight in my bedroom. I hated Triple H so much back then lol.
Posted on January 23rd, 2023 22:07

The date is January 23rd, 2000, and it's a Sunday. Anyone born today will have the star sign Aquarius. Currently, people are enjoying their weekend.

In America, the song What A Girl Wants by Christina Aguilera is on top of the singles charts. Over in the UK, I Have A Dream / Seasons In The Sun by Westlife is the number one hit song. Bill Clinton is currently the President of the United States, and the movie Next Friday is at the top of the Box Office.

Pokemon has become one of the most popular franchises in the world, as trading cards, toys and handheld games gross over one billion dollars. In technology news, more and more music companies are beginning to release MP3 players. The new MP3 format means that music listeners are able to listen to multiple albums on the go. It's the year 2000, so the music charts are being dominated by the likes of Christina Aguilera, Faith Hill, Savage Garden, Destiny's Child, Santana, Sisqó, Creed, Aaliyah and Enrique Iglesias.

If you were to travel back to this day, notable figures such as Big Pun, Tom Landry, David Tomlinson and Walter Matthau would all be still alive. On TV, people are watching popular shows such as "Friends", "7th Heaven", "Oz" and "Futurama". Meanwhile, gamers are playing titles such as "Silent Hill", "Mario Party", "Final Fantasy VIII" and "Age of Empires II: The Age of Kings".

Children and teenagers are currently watching television shows such as "Round the Twist", "Moesha", "Men in Black: The Series" and "The Powerpuff Girls". If you're a kid or a teenager, then you're probably playing with toys such as the PlayStation (PS1), Groovy Girls, the Dreamcast and Finger skateboards.

These are trending news stories and fads that were prevalent at this time. These are topics that would have been in the media on January 23rd, 2000.

News stories, pop culture trends, and other events that happened around January 23rd, 2000.

Check out our personality summary for people who were born on January 23rd, 2000.

Television shows that people were watching in January, 2000.

Popular video games that people were playing in January of 2000.

If you are looking for some childhood nostalgia, then you should check out January 23rd, 2006, instead.

Bill Clinton was the President of the United States on January 23rd, 2000.

Find out what your age was on January 23rd, 2000, by entering your DOB below.
This information is not saved on our server.

Here are some fun statistics about January 23rd, 2000.