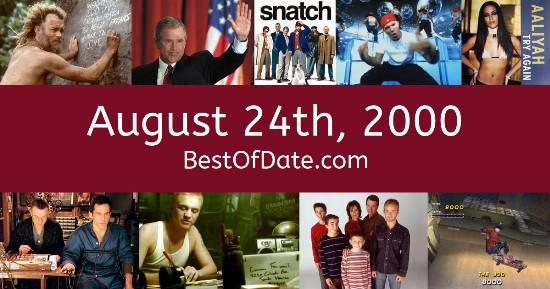 On August 24th, 2000, the following songs were at the top of the music charts in the USA and the UK.

The top "Box Office" movie on this date was the film "The Cell".

The date is August 24th, 2000, and it's a Thursday. Anyone born today will have the star sign Virgo. The summer of 2000 is coming to an end and fall is just around the corner.

In America, the song Incomplete by Sisqo is on top of the singles charts. Over in the UK, I Turn To You by Melanie C is the number one hit song. Bill Clinton is currently the President of the United States, and the movie The Cell is at the top of the Box Office.

In technology news, more and more music companies are beginning to release MP3 players. The new MP3 format means that music listeners are able to listen to multiple albums on the go. It's the year 2000, so the music charts are being dominated by the likes of Christina Aguilera, Faith Hill, Savage Garden, Destiny's Child, Santana, Sisqó, Creed, Aaliyah and Enrique Iglesias. If you were to travel back to this day, notable figures such as Yokozuna, Kirsty MacColl, Dale Earnhardt and Jennifer Syme would all be still alive.

On TV, people are watching popular shows such as "Last of the Summer Wine", "Stargate SG-1", "Ally McBeal" and "The Sopranos". Meanwhile, gamers are playing titles such as "Legacy of Kain: Soul Reaver", "Tony Hawk's Pro Skater", "Diablo II" and "Colin McRae Rally 2.0". Children and teenagers are currently watching television shows such as "Round the Twist", "The Angry Beavers", "The Wild Thornberrys" and "Grizzly Tales for Gruesome Kids".

These are trending news stories and fads that were prevalent at this time. These are topics that would have been in the media on August 24th, 2000.

Check out our personality summary for people who were born on August 24th, 2000.

Television shows that people were watching in August, 2000.

Popular video games that people were playing in August of 2000.

If you are looking for some childhood nostalgia, then you should check out August 24th, 2006, instead.

Celebrities, historical figures, and other notable people who were born on August 24th.

Bill Clinton was the President of the United States on August 24th, 2000.

Enter your date of birth below to find out how old you were on August 24th, 2000.
This information is not transmitted to our server.