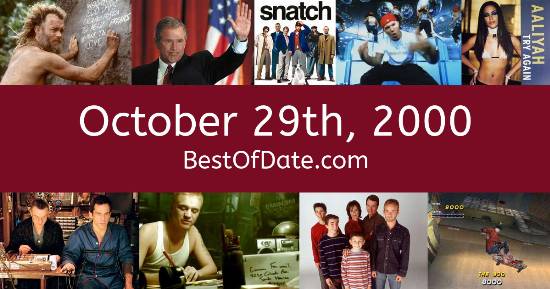 On October 29th, 2000, the following songs were at the top of the music charts in the USA and the UK.

The top "Box Office" movie on this date was the film "Meet the Parents".

The date is October 29th, 2000, and it's a Sunday. Anyone born today will have the star sign Scorpio. Currently, people are enjoying their weekend.

The summer is long gone. Temperatures have started to become much cooler and the evenings are beginning to get darker. Fallen leaves have carpeted driveways, lawns, pathways and sidewalks and there's a fresh earthy scent in the ear. Halloween of 2000 is just days away. People are watching horror movies and thinking about which costume they are going to wear. Others are organizing parties.

In America, the song Come On Over Baby by Christina Aguilera is on top of the singles charts. Over in the UK, Beautiful Day by U2 is the number one hit song. Bill Clinton is currently the President of the United States, and the movie Meet the Parents is at the top of the Box Office.

It's the year 2000, so the music charts are being dominated by the likes of Christina Aguilera, Faith Hill, Savage Garden, Destiny's Child, Santana, Sisqó, Creed, Aaliyah and Enrique Iglesias. Meanwhile, the Nokia 3310 is one of the most popular cell phones on the market at the moment. Stores across the world are currently selling a wide range of custom covers for the phone. Nu-metal band Linkin Park have just released their album "Hybrid Theory".

In baseball, the New York Yankees have just won the 2000 World Series after defeating the New York Mets 4-1. This is the Yankees third consecutive championship. Sony have just released the PlayStation 2 video games console. If you were to travel back to this day, notable figures such as Dale Earnhardt, Joey Ramone, Aaliyah and Thuy Trang would all be still alive.

On TV, people are watching popular shows such as "Everybody Loves Raymond", "Oz", "The West Wing" and "Malcolm in the Middle". Meanwhile, gamers are playing titles such as "Medal of Honor", "Gran Turismo 2", "Dead or Alive 2" and "TimeSplitters". Children and teenagers are currently watching television shows such as "Moesha", "City Guys", "CatDog" and "Bob the Builder".

Popular toys at the moment include the likes of Groovy Girls, Betty Spaghetty (doll), the Dreamcast and HitClips audio player.

These are trending news stories and fads that were prevalent at this time. These are topics that would have been in the media on October 29th, 2000.

News stories and other events that happened around October 29th, 2000.

Check out our personality summary for people who were born on October 29th, 2000.

Television shows that people were watching in October, 2000.

Popular video games that people were playing in October of 2000.

If you are looking for some childhood nostalgia, then you should check out October 29th, 2006 instead.

American painter. Deceased
Born on October 29th, 1942
He was not alive on this date.

Bill Clinton was the President of the United States on October 29th, 2000.

Tony Blair was the Prime Minister of the United Kingdom on October 29th, 2000.

Find out what your age was on October 29th, 2000, by entering your DOB below.
This information is not saved on our server.

Here are some fun statistics about October 29th, 2000.