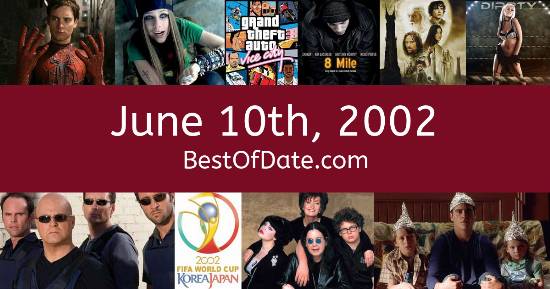 These songs were on top of the music charts in the United States and the United Kingdom on June 10th, 2002.

The date is June 10th, 2002, and it's a Monday. Anyone born today will have the star sign Gemini. It's summer, so the temperatures are warmer and the evenings are longer than usual.

In America, the song Foolish by Ashanti is on top of the singles charts. Over in the UK, Light My Fire by Will Young is the number one hit song. George W. Bush Jnr. is currently the President of the United States, and the movie Sum of All Fears is at the top of the Box Office.

A rock music genre called "Emo" is beginning to become more and more mainstream. If you were to travel back to this day, notable figures such as John Gotti, Jam Master Jay, Lana Clarkson and Curt Hennig would all be still alive. On TV, people are watching popular shows such as "Friends", "Buffy the Vampire Slayer", "That '70s Show" and "Boston Public".

Meanwhile, gamers are playing titles such as "Crazy Taxi", "Final Fantasy X", "Halo: Combat Evolved" and "Kingdom Hearts". Kids and teenagers are watching TV shows such as "Dawson's Creek", "SpongeBob SquarePants", "Rocket Power" and "The Amanda Show". If you're a kid or a teenager, then you're probably playing with toys such as Groovy Girls, Poo-Chi (robot dog), Bratz dolls and Yu-Gi-Oh! Trading Card Game.

These are trending news stories and fads that were prevalent at this time. These are topics that would have been in the media on June 10th, 2002.

Check out our personality summary for people who were born on June 10th, 2002.

Television shows that people were watching in June, 2002.

Popular video games that people were playing in June of 2002.

If you are looking for some childhood nostalgia, then you should check out June 10th, 2008 instead.

Tony Blair was the Prime Minister of the United Kingdom on June 10th, 2002.

Enter your date of birth below to find out how old you were on June 10th, 2002.
This information is not transmitted to our server.