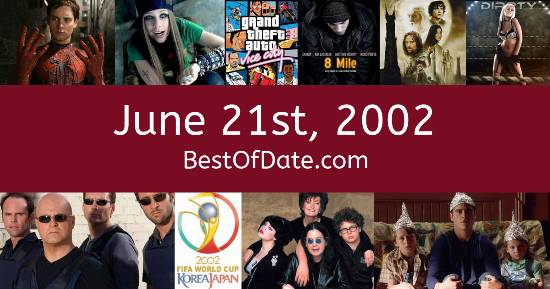 Songs that were on top of the music singles charts in the USA and the United Kingdom on June 21st, 2002.

The date is June 21st, 2002 and it's a Friday. Anyone born today will have the star sign Cancer. Currently, people have "that Friday feeling" and are looking forward to the weekend.

It's summer, so the temperatures are warmer and the evenings are longer than usual. In America, the song Foolish by Ashanti is on top of the singles charts. Over in the UK, A Little Less Conversation by Elvis vs JXL is the number one hit song.

George W. Bush Jnr. is currently the President of the United States and the movie Minority Report is at the top of the Box Office. In the United Kingdom, Tony Blair is the current Prime Minister. Meanwhile, the Nokia 3310 is one of the most popular cell phones on the market at the moment. Stores across the world are currently selling a wide range of custom covers for the phone.

The 2002 FIFA World Cup is currently taking place in South Korea and Japan. A rock music genre called "Emo" is beginning to become more and more mainstream. In celebrity news, a DNA paternity test has shown that businessman Steve Bing is the father of actress Elizabeth Hurley's son, who was born at the start of April. Bing had initially denied that he was the father of Damian Charles Hurley.

On TV, people are watching popular shows such as "King of the Hill", "Buffy the Vampire Slayer", "That '70s Show" and "Grounded for Life". Meanwhile, gamers are playing titles such as "Final Fantasy X", "WWF SmackDown! Just Bring It", "Return to Castle Wolfenstein" and "Medal of Honor: Allied Assault". Kids and teenagers are watching TV shows such as "7th Heaven", "SpongeBob SquarePants", "Dora the Explorer" and "My Wife and Kids".

Popular toys at the moment include the likes of Groovy Girls, Poo-Chi (robot dog), Razor (scooter) and the PlayStation 2.

If you are looking for some childhood nostalgia, then check out June 21st, 2008 instead.

Tony Blair was the Prime Minister of the United Kingdom on June 21st, 2002.