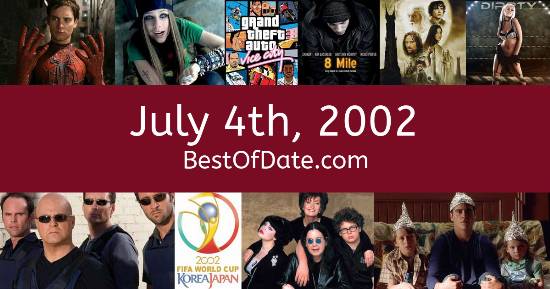 Songs that were on top of the music singles charts in the USA and the United Kingdom on July 4th, 2002:

The date is July 4th, 2002 and it's a Thursday. Anyone born today will have the star sign Cancer. America is celebrating the 4th of July, which means that fireworks are being set off and families are holding barbeques together.

It's summer, so the temperatures are warmer and the evenings are longer than usual. In America, the song Hot In Herre by Nelly is on top of the singles charts. Over in the UK, A Little Less Conversation by Elvis vs JXL is the number one hit song.

George W. Bush Jnr. is currently the President of the United States and the movie Mr. Deeds is at the top of the Box Office. In the United Kingdom, Tony Blair is the current Prime Minister. The Nokia 3310 is one of the most popular phones on the market at the moment.

A popular software program called LimeWire is being used by many people to share MP3 files (and viruses). It's 2002, so the music charts are being dominated by the likes of Ashanti, Nelly, Eminem, Usher and Jennifer Lopez. A rock music genre called "Emo" is beginning to become more and more mainstream.

People are watching popular TV shows such as "Last of the Summer Wine", "Rugrats", "CatDog" and "The Sopranos". Meanwhile, gamers are playing titles such as "Devil May Cry", "Grand Theft Auto III", "Tony Hawk's Pro Skater 3" and "Return to Castle Wolfenstein". Children and teenagers are currently watching television shows such as "Rugrats", "Pokemon", "The Wild Thornberrys" and "The Fairly OddParents".

If you're a kid or a teenager, then you're probably playing with toys such as "Poo-Chi (robot dog)", "PlayStation 2", "Bratz (dolls)" and "Yu-Gi-Oh! Trading Card Game".

Celebrities, historical figures and noteable people that were born on the 4th of July:

Who was the Prime Minister of the United Kingdom on July 4th, 2002?

Enter your date of birth below to find out how old you were on July 4th, 2002.

Looking for some nostalgia? Here are some Youtube videos relating to July 4th, 2002. Please note that videos are automatically selected by Youtube and that results may vary! Click on the "Load Next Video" button to view the next video in the search playlist. In many cases, you'll find episodes of old TV shows, documentaries, music videos and soap dramas.

Here are some fun statistics about July 4th, 2002.