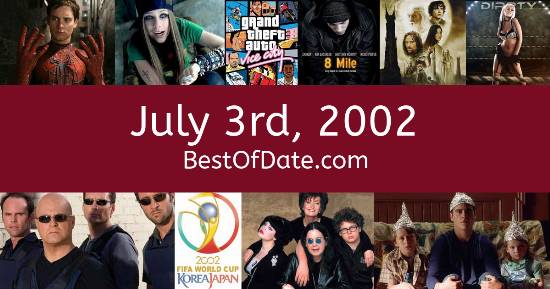 Songs that were on top of the music singles charts in the USA and the United Kingdom on July 3rd, 2002.

The date is July 3rd, 2002 and it's a Wednesday. Anyone born today will have the star sign Cancer. In America, the July 4th celebrations are fast approaching.

It's summer, so the temperatures are warmer and the evenings are longer than usual. In America, the song Hot In Herre by Nelly is on top of the singles charts. Over in the UK, A Little Less Conversation by Elvis vs JXL is the number one hit song.

George W. Bush Jnr. is currently the President of the United States and the movie Mr. Deeds is at the top of the Box Office. In the United Kingdom, Tony Blair is the current Prime Minister. Meanwhile, the Nokia 3310 is one of the most popular cell phones on the market at the moment. Stores across the world are currently selling a wide range of custom covers for the phone.

Kids and teenagers are watching TV shows such as "CatDog", "Dora the Explorer", "Rocket Power" and "Malcolm in the Middle". Popular toys at the moment include the likes of Poo-Chi (robot dog), the PlayStation 2, Bratz (dolls) and Yu-Gi-Oh! Trading Card Game.

If you are looking for some childhood nostalgia, then check out July 3rd, 2008 instead.

George W. Bush Jnr. was the President of the United States on July 3rd, 2002.

Tony Blair was the Prime Minister of the United Kingdom on July 3rd, 2002.

Enter your date of birth below to find out how old you were on July 3rd, 2002.

Here are some fun statistics about July 3rd, 2002.