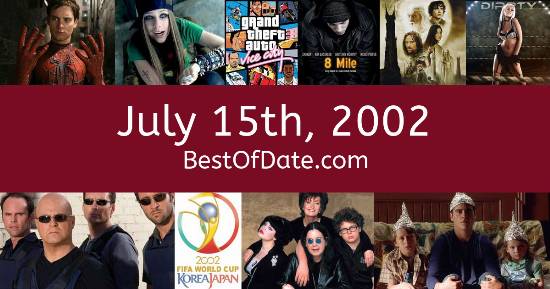 Songs that were on top of the music singles charts in the USA and the United Kingdom on July 15th, 2002.

The date is July 15th, 2002 and it's a Monday. Anyone born today will have the star sign Cancer. It's summer, so the temperatures are warmer and the evenings are longer than usual.

In America, the song Hot In Herre by Nelly is on top of the singles charts. Over in the UK, Anyone Of Us by Gareth Gates is the number one hit song. George W. Bush Jnr. is currently the President of the United States and the movie Men in Black II is at the top of the Box Office.

It's 2002, so the music charts are being dominated by the likes of Ashanti, Nickelback, Nelly, Eminem, Usher, Blu Cantrell, The Calling, Linkin Park and Jennifer Lopez. A rock music genre called "Emo" is beginning to become more and more mainstream. On TV, people are watching popular shows such as "Last of the Summer Wine", "Sabrina, the Teenage Witch", "Oz" and "Alias".

Meanwhile, gamers are playing titles such as "Devil May Cry", "Grand Theft Auto III", "Metal Gear Solid 2: Sons of Liberty" and "WWF SmackDown! Just Bring It". Children and teenagers are currently watching television shows such as "7th Heaven", "Recess", "Bear in the Big Blue House" and "Bob the Builder". Popular toys at the moment include the likes of Groovy Girls, the PlayStation 2, Bratz (dolls) and Yu-Gi-Oh! Trading Card Game.

Tony Blair was the Prime Minister of the United Kingdom on July 15th, 2002.

Leave a comment and tell everyone why July 15th, 2002 is important to you.