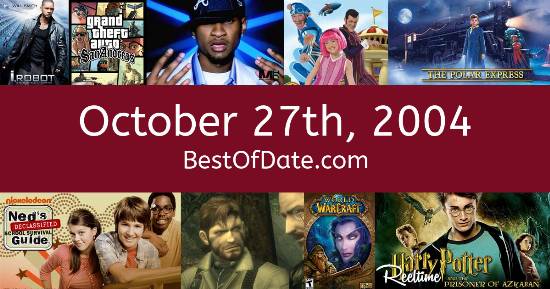 Songs that were on top of the music singles charts in the USA and the United Kingdom on October 27th, 2004.

The date is October 27th, 2004 and it's a Wednesday. Anyone born today will have the star sign Scorpio. The summer is long gone. Temperatures have started to become much cooler and the evenings are beginning to get darker.

Fallen leaves have carpeted driveways, lawns, pathways and sidewalks and there's a fresh earthy scent in the ear. Halloween of 2004 is just days away. People are watching horror movies and thinking about which costume they are going to wear. Others are organizing parties. In America, the song My Boo by Usher & Alicia Keys is on top of the singles charts.

Over in the UK, Call On Me by Eric Prydz is the number one hit song. George W. Bush Jnr. is currently the President of the United States and the movie Shark Tale is at the top of the Box Office. In the United Kingdom, Tony Blair is the current Prime Minister.

A popular software program called LimeWire is being used by many people to share MP3 files (and viruses). Internet users are using MSN Messenger to chat with each other online. It's 2004, so the music charts are being dominated by the likes of Usher, Alicia Keys, Maroon 5, OutKast, Mario Winans, the Terror Squad and Ciara.

On TV, people are watching popular shows such as "The Powerpuff Girls", "Smallville", "Without a Trace" and "That's So Raven". Meanwhile, gamers are playing titles such as "Call of Duty", "True Crime: Streets of LA", "Need for Speed: Underground" and "Manhunt". Kids and teenagers are watching TV shows such as "That '70s Show", "Malcolm in the Middle", "The Fairly OddParents" and "Veronica Mars".

Popular toys at the moment include the likes of the PlayStation 2, Yu-Gi-Oh! Trading Card Game, Beyblades (spinning top toys) and RoboSapien (toy robot).

George W. Bush Jnr. was the President of the United States on October 27th, 2004.

Tony Blair was the Prime Minister of the United Kingdom on October 27th, 2004.

Enter your date of birth below to find out how old you were on October 27th, 2004.

Here are some fun statistics about October 27th, 2004.

Leave a comment and tell everyone why October 27th, 2004 is important to you.