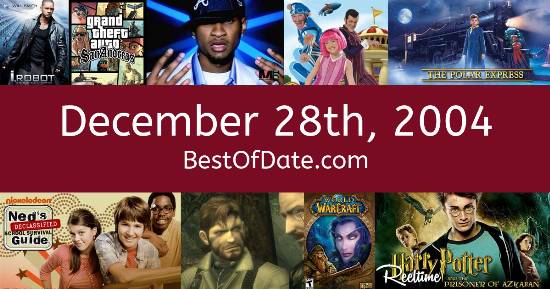 On December 28th, 2004, the following songs were at the top of the music charts in the USA and the UK.

The top "Box Office" movie on this date was the film "Lemony Snicket".

The date is December 28th, 2004, and it's a Tuesday. Anyone born today will have the star sign Capricorn. Christmas Day of 2004 has just passed and many people are relaxing at home and enjoying the holiday season.

In America, the song Drop It Like It's Hot by Snoop Dogg is on top of the singles charts. Over in the UK, Do They Know It's Christmas by Band Aid 20 is the number one hit song. George W. Bush Jnr. is currently the President of the United States, and the movie Lemony Snicket is at the top of the Box Office.

If you were to travel back to this day, notable figures such as Lamont Bentley, Johnnie Cochran, Pope John Paul II and Luther Vandross would all be still alive. On TV, people are watching popular shows such as "Last of the Summer Wine", "7th Heaven", "Malcolm in the Middle" and "The O.C.". Meanwhile, gamers are playing titles such as "Tony Hawk's Underground", "Prince of Persia: The Sands of Time", "Spider-Man 2" and "Ratchet & Clank: Up Your Arsenal".

Children and teenagers are currently watching television shows such as "Grizzly Tales for Gruesome Kids", "As Told by Ginger", "Kim Possible" and "My Life as a Teenage Robot". Popular toys at the moment include the likes of the PlayStation 2, VideoNow (portable player), RoboSapien (toy robot) and the Nintendo DS.

These are trending news stories and fads that were prevalent at this time. These are topics that would have been in the media on December 28th, 2004.

Check out our personality summary for people who were born on December 28th, 2004.

Television shows that people were watching in December, 2004.

Popular video games that people were playing in December of 2004.

If you are looking for some childhood nostalgia, then you should check out December 28th, 2010, instead.

Celebrities, historical figures, and other notable people who were born on December 28th.

George W. Bush Jnr. was the President of the United States on December 28th, 2004.

Enter your date of birth below to find out how old you were on December 28th, 2004.
This information is not transmitted to our server.

Here are some fun statistics about December 28th, 2004.