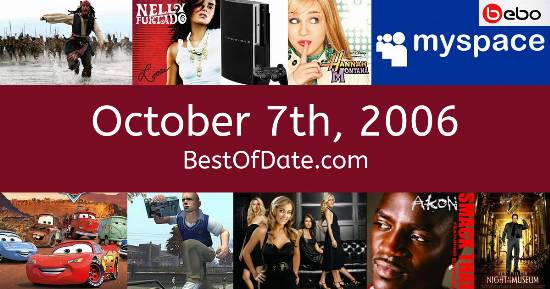 Songs that were on top of the music singles charts in the USA and the United Kingdom on October 7th, 2006.

The date is October 7th, 2006 and it's a Saturday. Anyone born today will have the star sign Libra. Currently, people are enjoying their weekend.

The summer is long gone. Temperatures have started to become much cooler and the evenings are beginning to get darker. Fallen leaves have carpeted driveways, lawns, pathways and sidewalks and there's a fresh earthy scent in the ear. In America, the song Sexy Back by Justin Timberlake is on top of the singles charts.

Over in the UK, I Don't Feel Like Dancing by Scissor Sisters is the number one hit song. George W. Bush Jnr. is currently the President of the United States and the movie The Departed is at the top of the Box Office. In the United Kingdom, Tony Blair is the current Prime Minister.

A rock music genre called "Emo" is extremely popular at the moment. The genre, which stands for "emotional hardcore", has created a subculture of "Emos" who dye their hair black and wear thick frame glasses. If you were to travel back to this day, notable figures such as James Brown, Gerald Ford, Bam Bam Bigelow and Anna Nicole Smith would all be still alive. On TV, people are watching popular shows such as "The Sopranos", "24", "Lost" and "Hogan Knows Best".

Meanwhile, gamers are playing titles such as "Guild Wars", "Shadow of the Colossus", "Call of Duty 2" and "Kingdom Hearts II". Children and teenagers are currently watching television shows such as "As Told by Ginger", "My Life as a Teenage Robot", "Ned's Declassified School Survival Guide" and "Everybody Hates Chris". Popular toys at the moment include the likes of the PlayStation 2, Bratz dolls, RoboSapien (toy robot) and the PSP.

If you are looking for some childhood nostalgia, then check out October 7th, 2012 instead.

George W. Bush Jnr. was the President of the United States on October 7th, 2006.

Tony Blair was the Prime Minister of the United Kingdom on October 7th, 2006.

Enter your date of birth below to find out how old you were on October 7th, 2006.

Here are some fun statistics about October 7th, 2006.