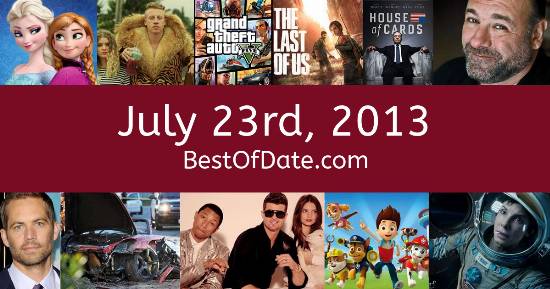 Songs that were on top of the music singles charts in the USA and the United Kingdom on July 23rd, 2013:

The date is July 23rd, 2013 and it's a Tuesday. Anyone born today will have the star sign Leo. It's summer, so the temperatures are warmer and the evenings are longer than usual.

Former NSA contractor Edward Snowden has just revealed to the public that American intelligence agencies have been running a widespread global surveillance programme called PRISM. People are saddened by the news that Glee actor Cory Monteith has died following a drug overdose. In the UK, Catherine Middleton has just given birth to Prince George.

Former Democratic congressman Anthony Weiner, who is currently running in the New York City mayoral race, has just been caught up in a second "sexting scandal". On TV, people are watching popular shows such as "RuPaul's Drag Race", "Glee", "The Vampire Diaries" and "The Walking Dead". Meanwhile, gamers are playing titles such as "Borderlands 2", "Call of Duty: Black Ops II", "DmC: Devil May Cry" and "Dota 2".

Kids and teenagers are watching TV shows such as "Peppa Pig", "LazyTown", "Phineas and Ferb" and "Jake and the Never Land Pirates". Popular toys include the likes of "Xbox 360", "PlayStation 3" and "The Wii U".

Celebrities, historical figures and noteable people who were born on the 23rd of July:

National holidays and famous events that fall on the 23rd of July:

Who was the Prime Minister of the United Kingdom on July 23rd, 2013?

Looking for some nostalgia? Here are some Youtube videos relating to July 23rd, 2013. Please note that videos are automatically selected by Youtube and that results may vary! Click on the "Load Next Video" button to view the next video in the search playlist. In many cases, you'll find episodes of old TV shows, documentaries, music videos and soap dramas.