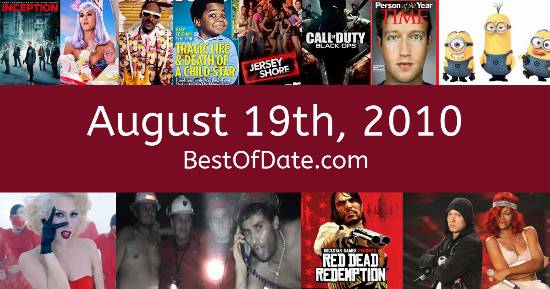 Songs that were on top of the music singles charts in the USA and the United Kingdom on August 19th, 2010.

The date is August 19th, 2010 and it's a Thursday. Anyone born today will have the star sign Leo. It's summer, so the temperatures are warmer and the evenings are longer than usual.

In America, the song Love The Way You Lie by Eminem ft Rihanna is on top of the singles charts. Over in the UK, Club Can't Handle Me by Flo Rida ft David Guetta is the number one hit song. Barack Obama is currently the President of the United States and the movie The Other Guys is at the top of the Box Office.

In Ireland, people are protesting the release of Larry Murphy, who was convicted of rape and attempted murder back in 2001. Murphy is regarded as being a suspect in the disappearance of a number of women in the Leinster area during the 1990s. Wrestling fans are mourning the death of Lance Cade, who has died from mixed drug intoxication. In celebrity news, actress Hilary Duff has recently tied the knot with ice hockey player Mike Comrie.

It has been announced that actor Michael Douglas is suffering from throat cancer. Meanwhile, CeeLo Green has released a new catchy song called "F**ck you!" On TV, people are watching popular shows such as "Dora the Explorer", "Two and a Half Men", "One Tree Hill" and "Prison Break".

Meanwhile, gamers are playing titles such as "Batman: Arkham Asylum", "Mass Effect 2", "Alan Wake" and "Red Dead Redemption". Kids and teenagers are watching TV shows such as "Dora the Explorer", "iCarly", "Wizards of Waverly Place" and "The Suite Life on Deck". Popular toys at the moment include the likes of the Xbox 360, the PlayStation 3, ZhuZhu Pets and ZhuZhu Pets.

If you are looking for some childhood nostalgia, then check out August 19th, 2016 instead.

Barack Obama was the President of the United States on August 19th, 2010.

David Cameron was the Prime Minister of the United Kingdom on August 19th, 2010.

Enter your date of birth below to find out how old you were on August 19th, 2010.