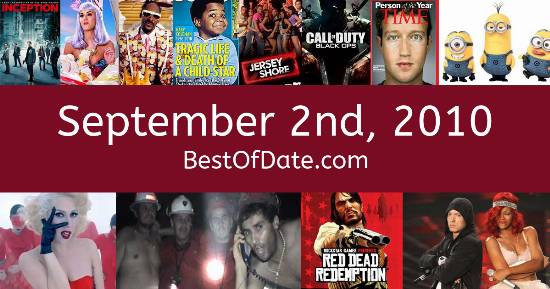 Songs that were on top of the music singles charts in the USA and the United Kingdom on September 2nd, 2010.

The date is September 2nd, 2010, and it's a Thursday. Anyone born today will have the star sign Virgo. Schools and colleges are starting again and Autumn has officially arrived. As a result, temperatures are beginning to cool and trees are starting to shed their leaves.

In America, the song Love The Way You Lie by Eminem ft Rihanna is on top of the singles charts. Over in the UK, Dynamite by Taio Cruz is the number one hit song. Barack Obama is currently the President of the United States, and the movie Takers is at the top of the Box Office.

It's 2010, so the music charts are being dominated by artists such as Kesha, Katy Perry, Rihanna, Eminem and Bruno Mars. Rescuers in Chile are currently working to release 33 men who have become trapped following a cave-in at a gold and copper mine near the city of Copiapó. The ongoing effort to rescue the miners is receiving widespread media attention. Popular news aggregation website Digg has enraged its users with the release of a new redesign called "Digg V4". This unpopular redesign has led to disgruntled users leaving Digg for its competitor Reddit.

Socialite Paris Hilton is in the news after being arrested in Las Vegas for possession of cocaine. In soccer, Liverpool midfielder Javier Mascherano has joined Spanish side Barcelona. If you were to travel back to this day, notable figures such as Denise Borino-Quinn, Leslie Nielsen, Pete Postlethwaite and Nate Dogg would all be still alive.

Popular toys at the moment include the likes of the Xbox 360, the PlayStation 3, Iggle Piggle and the iPad.

These are trending news stories and fads that were prevalent at this time. These are topics that would have been in the media on September 2nd, 2010.

Check out our personality summary for people who were born on September 2nd, 2010.

If you are looking for some childhood nostalgia, then you should check out September 2nd, 2016 instead.

Soccer manager. Deceased
Born on September 2nd, 1913
He was not alive on this date.

American school teacher. Deceased
Born on September 2nd, 1948
She was not alive on this date.

Barack Obama was the President of the United States on September 2nd, 2010.

Enter your date of birth below to find out how old you were on September 2nd, 2010.
This information is not transmitted to our server.

Here are some fun statistics about September 2nd, 2010.