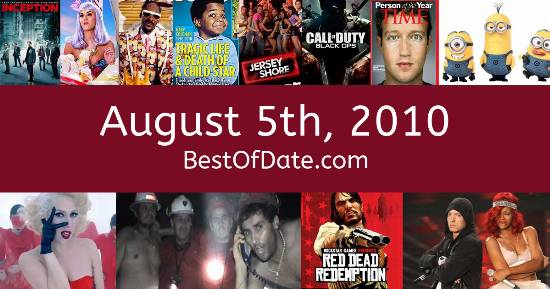 Songs that were on top of the music singles charts in the USA and the United Kingdom on August 5th, 2010.

The date is August 5th, 2010, and it's a Thursday. Anyone born today will have the star sign Leo. It's summer, so the temperatures are warmer and the evenings are longer than usual.

In America, the song Love The Way You Lie by Eminem ft Rihanna is on top of the singles charts. Over in the UK, All Time Low by The Wanted is the number one hit song. Barack Obama is currently the President of the United States, and the movie Inception is at the top of the Box Office.

It's 2010, so the music charts are being dominated by artists such as Kesha, Katy Perry, Rihanna, Eminem and Bruno Mars. Missing NBA player Lorenzen Wright has been found shot to death near a wooded area outside of Memphis, Tennessee. A local news interview of Antoine Dodson telling people to "hide yo kids, hide yo wife, and hide yo husband" because "they rapin' err'body out here" has become an Internet sensation. The video has inspired several musical remixes, such as the "Bed Intruder Song" by The Gregory Brothers.

Over 1,600 people have been killed by recent floods in Pakistan. Jersey Shore star "Snooki" has been arrested in New Jersey for disturbing the peace. Actor Charlie Sheen has pleaded guilty to a misdemeanor assault against his wife Brooke Mueller. The incident took place eight months previously, on Christmas Day of 2009.

Rescuers in Chile are currently working to release 33 men who have become trapped following a cave-in at a gold and copper mine near the city of Copiapó. The ongoing effort to rescue the miners is receiving widespread media attention. If you were to travel back to this day, notable figures such as Lance Cade, Denise Borino-Quinn, Pete Postlethwaite and Nate Dogg would all be still alive. On TV, people are watching popular shows such as "One Tree Hill", "How I Met Your Mother", "Mad Men" and "Community".

Meanwhile, gamers are playing titles such as "Grand Theft Auto: Chinatown Wars", "Uncharted 2: Among Thieves", "Call of Duty: Modern Warfare 2" and "Heavy Rain". Kids and teenagers are watching TV shows such as "Peppa Pig", "Ben 10", "Horrid Henry" and "Sonny with a Chance". Popular toys at the moment include the likes of the PlayStation 3, Iggle Piggle, the KidiZoom Camera and ZhuZhu Pets.

These are trending news stories and fads that were prevalent at this time. These are topics that would have been in the media on August 5th, 2010.

News stories and other events that happened around August 5th, 2010.

Check out our personality summary for people who were born on August 5th, 2010.

If you are looking for some childhood nostalgia, then you should check out August 5th, 2016 instead.

Barack Obama was the President of the United States on August 5th, 2010.

David Cameron was the Prime Minister of the United Kingdom on August 5th, 2010.

Find out what your age was on August 5th, 2010, by entering your DOB below.
This information is not saved on our server.

Here are some fun statistics about August 5th, 2010.