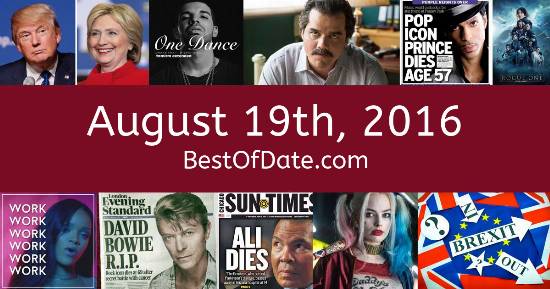 Songs that were on top of the music singles charts in the USA and the United Kingdom on August 19th, 2016.

The date is August 19th, 2016 and it's a Friday. Anyone born today will have the star sign Leo. Currently, people have "that Friday feeling" and are looking forward to the weekend.

It's summer, so the temperatures are warmer and the evenings are longer than usual. In America, the song Cheap Thrills by Sia is on top of the singles charts. Over in the UK, Cold Water by Major Lazer featuring Justin Bieber is the number one hit song.

Barack Obama is currently the President of the United States and the movie Suicide Squad is at the top of the Box Office. In the United Kingdom, Theresa May is the current Prime Minister. It's 2016, so the music charts are being dominated by artists such as Drake, Lukas Graham, Sia, Mike Posner, The Chainsmokers and Calvin Harris.

The 2016 Summer Olympics are currently taking place in Rio de Janeiro, Brazil. MMA fans are currently looking forward to UFC 202, where Conor McGregor will take on Nate Diaz in a rematch. In soccer, Everton defender John Stones has signed with Manchester City.

Showbiz websites are reacting to pop star Justin Bieber's decision to delete his Instagram account. American blog Gawker has just announced that it will be ceasing all operations. It has emerged that Olympic swimmer Ryan Lochte lied when he reported that he had been robbed by armed men while in Rio de Janeiro, Brazil.

If you were to travel back to this day, notable figures such as Fidel Castro, Big Syke, George Michael and Carrie Fisher would all be still alive. On TV, people are watching popular shows such as "Grey's Anatomy", "Prison Break", "Peaky Blinders" and "Power". Meanwhile, gamers are playing titles such as "Overwatch", "Overwatch", "Inside" and "PlayerUnknown's Battlegrounds".

Singer and rapper. Deceased
Born on August 19th, 1969
He was not alive on this date.

South African model. Deceased
Born on August 19th, 1983
She was not alive on this date.

Barack Obama was the President of the United States on August 19th, 2016.

Theresa May was the Prime Minister of the United Kingdom on August 19th, 2016.

Enter your date of birth below to find out how old you were on August 19th, 2016.