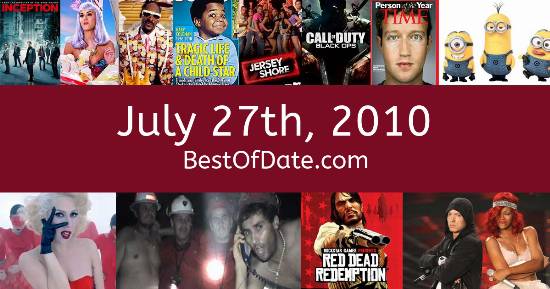 Songs that were on top of the music singles charts in the USA and the United Kingdom on July 27th, 2010.

The date is July 27th, 2010 and it's a Tuesday. Anyone born today will have the star sign Leo. It's summer, so the temperatures are warmer and the evenings are longer than usual.

In America, the song California Gurls by Katy Perry is on top of the singles charts. Over in the UK, We No Speak Americano by Yolanda Be Cool is the number one hit song. Barack Obama is currently the President of the United States and the movie Despicable Me is at the top of the Box Office.

It's 2010, so the music charts are being dominated by artists such as Kesha, Katy Perry, Rihanna, Eminem and Bruno Mars. The film "Inception", starring Leonardo DiCaprio, is currently being played in movie theaters. Actress Lindsay Lohan has just been sentenced to 90 days in jail for a parole violation.

In celebrity news, actor Orlando Bloom and model Miranda Kerr have been married in a secret ceremony. There are fears for the safety of NBA player Lorenzen Wright, who has gone missing in Tennessee. On TV, people are watching popular shows such as "Futurama", "House", "RuPaul's Drag Race" and "Glee".

Meanwhile, gamers are playing titles such as "Batman: Arkham Asylum", "Mass Effect 2", "Red Dead Redemption" and "StarCraft II: Wings of Liberty". Kids and teenagers are watching TV shows such as "Dora the Explorer", "Ben 10", "Mickey Mouse Clubhouse" and "Phineas and Ferb". Popular toys at the moment include the likes of the Xbox 360, the PlayStation 3, Iggle Piggle and ZhuZhu Pets.

If you are looking for some childhood nostalgia, then check out July 27th, 2016 instead.

Barack Obama was the President of the United States on July 27th, 2010.

David Cameron was the Prime Minister of the United Kingdom on July 27th, 2010.