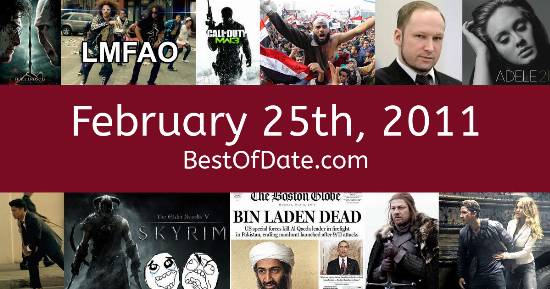 Songs that were on top of the music singles charts in the USA and the United Kingdom on February 25th, 2011.

The date is February 25th, 2011 and it's a Friday. Anyone born today will have the star sign Pisces. Currently, people have "that Friday feeling" and are looking forward to the weekend.

In America, the song Black And Yellow by Wiz Khalifa is on top of the singles charts. Over in the UK, Someone Like You by Adele is the number one hit song. Barack Obama is currently the President of the United States and the movie Hall Pass is at the top of the Box Office.

181 people have tragically lost their lives following an earthquake in the city of Christchurch, New Zealand. Search and rescue operations are currently ongoing. In Ireland, Fianna Fail have just been heavily defeated in the 2011 General Election. The party, which has been in power since 1997, has lost 51 seats, making it the worst defeat of a sitting government in the history of the country. Anti-government protests in Libya have continued to intensify. Security forces are abandoning areas in the capital Tripoli and Mitiga International Airport has been taken over by anti-government protesters. US President Barack Obama has come out and urged Colonel Gaddafi to step down from power.

On TV, people are watching popular shows such as "CSI: Miami", "Two and a Half Men", "How I Met Your Mother" and "The Vampire Diaries". Meanwhile, gamers are playing titles such as "God of War III", "Alan Wake", "Halo: Reach" and "Call of Duty: Black Ops". Kids and teenagers are watching TV shows such as "Dora the Explorer", "The Fairly OddParents", "One Tree Hill" and "Good Luck Charlie".

If you are looking for some childhood nostalgia, then check out February 25th, 2017 instead.

Celebrities, historical figures and notable people who were born on the 25th of February.

Barack Obama was the President of the United States on February 25th, 2011.

David Cameron was the Prime Minister of the United Kingdom on February 25th, 2011.

Enter your date of birth below to find out how old you were on February 25th, 2011.

Here are some fun statistics about February 25th, 2011.