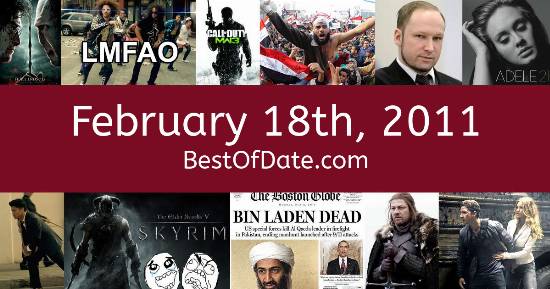 Songs that were on top of the music singles charts in the USA and the United Kingdom on February 18th, 2011.

The date is February 18th, 2011 and it's a Friday. Anyone born today will have the star sign Aquarius. Currently, people have "that Friday feeling" and are looking forward to the weekend.

Valentine's Day of 2011 has just passed. In America, the song Grenade by Bruno Mars is on top of the singles charts. Over in the UK, Price Tag by Jessie J is the number one hit song.

Barack Obama is currently the President of the United States and the movie Unknown is at the top of the Box Office. In the United Kingdom, David Cameron is the current Prime Minister. The term "hipster" is currently growing in use. The word is being used to describe people who are pretentious and deliberately anti-mainstream.

Video rental stores such as Blockbuster are continuing to close their doors at the moment. This is due to the increasing popularity of online streaming services such as Netflix and Hulu. Pre-made comics called "Rage Comics" are extremely popular on the Internet at the moment, as people use them to share relatable experiences. A wave of demonstrations and protests have been taking place across the Middle East, in what has become known as the "Arab Spring".

It's 2011, so the music charts are being dominated by artists such as Adele, Maroon 5, LMFAO, Katy Perry, Rihanna and Bruno Mars. Protesters in Egypt are celebrating following the recent resignation of president Hosni Mubarak. In Ireland, the campaign for the 2011 General Election is taking place. Fianna Fail, which have been in power since 1997, are expected to perform badly because of the the economic crisis that has been gripping the country since 2008.

Protests have started in Libya. Crowds are hurling rocks and petrol bombs in Benghazi and calling for an end to Colonel Muammar Gaddafi's government. If you were to travel back to this day, notable figures such as Nate Dogg, Elizabeth Taylor, Randy Savage and Ryan Dunn would all be still alive. On TV, people are watching popular shows such as "CSI: NY", "Desperate Housewives", "Prison Break" and "Bones".

Meanwhile, gamers are playing titles such as "Heavy Rain", "Red Dead Redemption", "StarCraft II: Wings of Liberty" and "Call of Duty: Black Ops". Children and teenagers are currently watching television shows such as "Phineas and Ferb", "Glee", "Big Time Rush" and "Victorious". If you're a kid or a teenager, then you're probably playing with toys such as the Xbox 360, the PlayStation 3, the KidiZoom Camera and ZhuZhu Pets.

If you are looking for some childhood nostalgia, then check out February 18th, 2017 instead.

Barack Obama was the President of the United States on February 18th, 2011.

David Cameron was the Prime Minister of the United Kingdom on February 18th, 2011.

Enter your date of birth below to find out how old you were on February 18th, 2011.

Here are some fun statistics about February 18th, 2011.