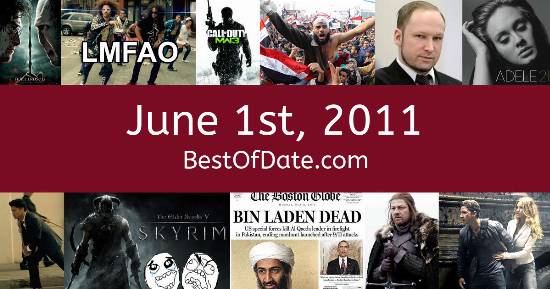 Songs that were on top of the music singles charts in the USA and the United Kingdom on June 1st, 2011.

The following comments about June 1st, 2011 were written by our visitors.

The date is June 1st, 2011, and it's a Wednesday. Anyone born today will have the star sign Gemini. It's summer, so the temperatures are warmer and the evenings are longer than usual.

In America, the song Rolling In The Deep by Adele is on top of the singles charts. Over in the UK, Give Me Everything by Pitbull is the number one hit song. Barack Obama is currently the President of the United States, and the movie The Hangover Part II is at the top of the Box Office.

Actress Lindsay Lohan has just received a 120-day jail sentence for theft. Former Serbian general Ratko Mladić has been arrested in Lazarevo, northern Serbia for war crimes and crimes against humanity. Kim Kardashian and NBA player Kris Humphries have recently become engaged. Democratic congressman Anthony Weiner has come under fire following reports that he sent a woman explicit photographs over Twitter. Weiner is currently denying that he sent the photographs.

Barcelona have won the 2011 UEFA Champions League after defeating Manchester United 3-1 in the final. A blackhat hacking group called "LulzSec" are currently in the news following a number of high profile attacks on companies such as Sony. NBA star Shaquille O'Neal has announced on social media that he will be retiring.

An Advice Animal meme called "Good Guy Greg" is beginning to take off in popularity. If you were to travel back to this day, notable figures such as Ryan Dunn, Betty Ford, Amy Winehouse and Zyzz would all be still alive. On TV, people are watching popular shows such as "Extreme Makeover: Home Edition", "Prison Break", "Glee" and "Community".

Meanwhile, gamers are playing titles such as "StarCraft II: Wings of Liberty", "Dead Space 2", "Portal 2" and "Terraria". Kids and teenagers are watching TV shows such as "One Tree Hill", "Glee", "Team Umizoomi" and "Jake and the Never Land Pirates". If you're a kid or a teenager, then you're probably playing with toys such as the Xbox 360, the KidiZoom Camera, ZhuZhu Pets and the iPad.

These are trending news stories and fads that were prevalent at this time. These are topics that would have been in the media on June 1st, 2011.

News stories and other events that happened around June 1st, 2011.

Check out our personality summary for people who were born on June 1st, 2011.

If you are looking for some childhood nostalgia, then you should check out June 1st, 2017 instead.

Barack Obama was the President of the United States on June 1st, 2011.

David Cameron was the Prime Minister of the United Kingdom on June 1st, 2011.

Find out what your age was on June 1st, 2011, by entering your DOB below.
This information is not saved on our server.

Here are some fun statistics about June 1st, 2011.