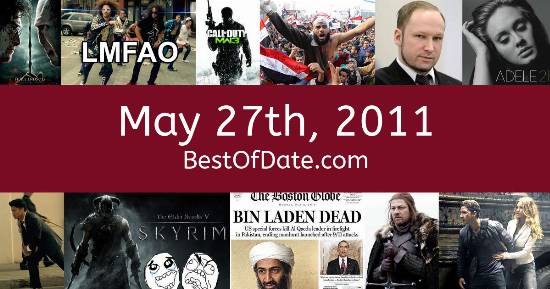 Songs that were on top of the music singles charts in the USA and the United Kingdom on May 27th, 2011.

The date is May 27th, 2011 and it's a Friday. Anyone born today will have the star sign Gemini. Currently, people have "that Friday feeling" and are looking forward to the weekend.

The summer of 2011 has finally arrived. The weather has warmed up and the evenings are brighter than usual. In America, the song Rolling In The Deep by Adele is on top of the singles charts. Over in the UK, Give Me Everything by Pitbull is the number one hit song.

Barack Obama is currently the President of the United States and the movie The Hangover Part II is at the top of the Box Office. In the United Kingdom, David Cameron is the current Prime Minister. The term "hipster" is currently growing in use. The word is being used to describe people who are pretentious and deliberately anti-mainstream.

A fad called "planking", which involves a person lying face down in an unusual location, is popular at the moment. The recent killing of wanted terrorist leader Osama Bin Laden at the start of this month is continuing to be a topic of discussion. The game "L.A. Noire" has just been released.

Wrestling fans are mourning the death of WWF legend Randy Savage, who recently passed away from a heart attack. Internet users are currently joking about how Harold Camping's "Rapture" prediction for the 21st of May has not come true. The Grímsvötn volcano in Iceland has erupted and is currently disrupting air traffic across Europe.

In soccer, Chelsea have sacked manager Carlo Ancelotti after his second season in charge. 158 people have tragically lost their lives in Joplin, Missouri following a powerful multiple-vortex tornado. Meanwhile, Call of Duty fans are excited following the recent release of the first gameplay trailer for "Call of Duty: Modern Warfare 3".

The ongoing trial of Casey Anthony for the murder her 2-year-old daughter Caylee is receiving widespread attention on social media. Scotty McCreery has just won the 10th season of American Idol. Actress Lindsay Lohan has just received a 120-day jail sentence for theft. Former Serbian general Ratko Mladić has been arrested in Lazarevo, northern Serbia for war crimes and crimes against humanity.

Kim Kardashian and NBA player Kris Humphries have recently become engaged. Democratic congressman Anthony Weiner has come under fire following reports that he sent a woman explicit photographs over Twitter. Weiner is currently denying that he sent the photographs. On TV, people are watching popular shows such as "CSI: Miami", "CSI: NY", "Bones" and "Sons of Anarchy".

Meanwhile, gamers are playing titles such as "Farmville", "Civilization V", "Crysis 2" and "Duke Nukem Forever". Children and teenagers are currently watching television shows such as "Mickey Mouse Clubhouse", "Phineas and Ferb", "Glee" and "Big Time Rush". If you're a kid or a teenager, then you're probably playing with toys such as the Xbox 360, the KidiZoom Camera, ZhuZhu Pets and the iPad.

Notable events that occurred around May 27th, 2011.

If you are looking for some childhood nostalgia, then check out May 27th, 2017 instead.

Historical weather information for May 27th, 2011.

Barack Obama was the President of the United States on May 27th, 2011.

David Cameron was the Prime Minister of the United Kingdom on May 27th, 2011.