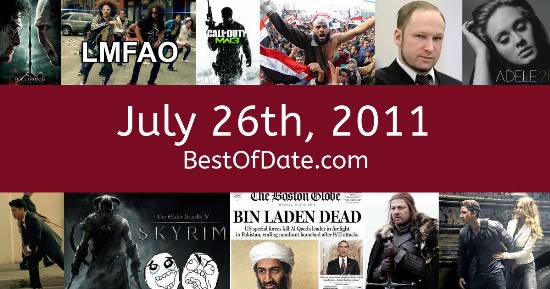 Songs that were on top of the music singles charts in the USA and the United Kingdom on July 26th, 2011.

The date is July 26th, 2011 and it's a Tuesday. Anyone born today will have the star sign Leo. It's summer, so the temperatures are warmer and the evenings are longer than usual.

In America, the song Party Rock Anthem by LMFAO is on top of the singles charts. Over in the UK, Glad You Came by The Wanted is the number one hit song. Barack Obama is currently the President of the United States and the movie Captain America is at the top of the Box Office.

A civil war is raging on in Libya. Large battles are taking place between Colonel Gaddafi's government forces and Libyan rebels, who are being supported by NATO. A fad called "planking", which involves a person lying face down in an unusual location, is popular at the moment. A blackhat hacking group called "LulzSec" are currently in the news following a number of high profile attacks on companies such as Sony.

An Advice Animal meme called "Good Guy Greg" is beginning to take off in popularity. Google have just launched their new social network "Google+" and people are wondering if it can challenge Facebook for the top spot. Norway is in mourning following two sequential terrorist attacks by a man called Anders Behring Breivik. The shocking attacks have left 77 people dead.

Music fans are in mourning following the recent death of English singer Amy Winehouse due to alcohol poisoning. Whinehouse's death has reignited discussion about the "27 Club" - a list of popular celebrities who passed away at the age of 27. On TV, people are watching popular shows such as "Futurama", "Two and a Half Men", "How I Met Your Mother" and "The Vampire Diaries". Meanwhile, gamers are playing titles such as "Civilization V", "Fallout: New Vegas", "Crysis 2" and "Terraria".

Children and teenagers are currently watching television shows such as "The Fairly OddParents", "One Tree Hill", "Big Time Rush" and "Good Luck Charlie". Popular toys at the moment include the likes of the Xbox 360, the PlayStation 3, ZhuZhu Pets and the iPad.

If you are looking for some childhood nostalgia, then check out July 26th, 2017 instead.

Barack Obama was the President of the United States on July 26th, 2011.

David Cameron was the Prime Minister of the United Kingdom on July 26th, 2011.