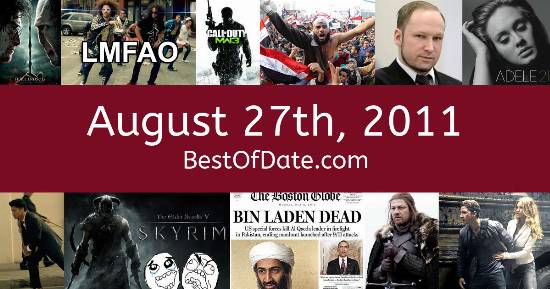 Songs that were on top of the music singles charts in the USA and the United Kingdom on August 27th, 2011:

The date is August 27th, 2011 and it's a Saturday. Anyone born today will have the star sign Virgo. Currently, people are enjoying their weekend.

The summer of 2011 is coming to an end and fall is just around the corner. In America, the song Party Rock Anthem by LMFAO is on top of the singles charts. Over in the UK, Don't Go by Wretch 32 is the number one hit song.

Barack Obama is currently the President of the United States and the movie Rise of the Planet of the Apes is at the top of the Box Office. In the United Kingdom, David Cameron is the current Prime Minister. The term "hipster" is currently growing in use. The word is being used to describe people who are pretentious and deliberately anti-mainstream.

Pre-made comics called "Rage Comics" are extremely popular on the Internet at the moment, as people use them to share relatable experiences. It's 2011, so the music charts are being dominated by artists such as Adele, LMFAO, Katy Perry and Bruno Mars. A fad called "planking", which involves a person lying face down in an unusual location, is popular at the moment.

An Advice Animal meme called "Good Guy Greg" is beginning to take off in popularity. Google have just launched their new social network "Google+" and people are wondering if it can challenge Facebook for the top spot. Protests in Syria have snowballed and a civil war has started. Armed militias are currently springing up across the country.

Kim Kardashian and Kris Humphries have married after dating for less than a year. A civil war is raging on in Libya. Large battles are taking place between Colonel Gaddafi's government forces and Libyan rebels, who are being supported by NATO. Currently, the Battle of Tripoli is taking place, as rebel forces hope to capture the capital. The catchphrase "We are the 99%" has become popular among those wanting to spread awareness about wealth inequality in America. People are currently posting photographs of themselves holding placards that describe their financial situation.

On TV, people are watching popular shows such as "CSI: Miami", "Two and a Half Men", "Bones" and "The Vampire Diaries". Meanwhile, gamers are playing titles such as "Halo: Reach", "Fallout: New Vegas", "Crysis 2" and "Portal 2". Kids and teenagers are watching TV shows such as "The Fairly OddParents", "Curious George", "Good Luck Charlie" and "Jake and the Never Land Pirates".

Popular toys include the likes of "Xbox 360", "PlayStation 3", "iPad" and "The LeapPad Explorer".

Celebrities, historical figures and noteable people who were born on the 27th of August:

Who was the Prime Minister of the United Kingdom on August 27th, 2011?

Enter your date of birth below to find out how old you were on August 27th, 2011.

Looking for some nostalgia? Here are some Youtube videos relating to August 27th, 2011. Please note that videos are automatically selected by Youtube and that results may vary! Click on the "Load Next Video" button to view the next video in the search playlist. In many cases, you'll find episodes of old TV shows, documentaries, music videos and soap dramas.