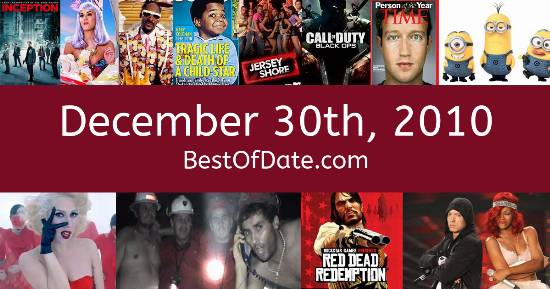 On December 30th, 2010, the following songs were at the top of the music charts in the USA and the UK.

The top "Box Office" movie on this date was the film "Tron Legacy".

The date is December 30th, 2010, and it's a Thursday. Anyone born today will have the star sign Capricorn. Christmas Day of 2010 has just passed and many people are relaxing at home and enjoying the holiday season.

In America, the song Firework by Katy Perry is on top of the singles charts. Over in the UK, When We Collide by Matt Cardle is the number one hit song. Barack Obama is currently the President of the United States, and the movie Tron Legacy is at the top of the Box Office.

It's 2010, so the music charts are being dominated by artists such as Kesha, Katy Perry, Rihanna, Eminem and Bruno Mars. Pre-made comics called "Rage Comics" are extremely popular on the Internet at the moment, as people use them to share relatable experiences. People on the Internet are using the phrase "That Really Rustled My Jimmies" to express their annoyance at things.

Anti-government street demonstrations are taking place in Tunisia following the the self-immolation of a man called Mohamed Bouazizi. The protests have been caused by high unemployment and the cost of food. If you were to travel back to this day, notable figures such as Pete Postlethwaite, Nate Dogg, Elizabeth Taylor and Randy Savage would all be still alive. On TV, people are watching popular shows such as "How I Met Your Mother", "Dexter", "Skins" and "The Walking Dead".

Meanwhile, gamers are playing titles such as "Mafia Wars", "Mass Effect 2", "God of War III" and "Red Dead Redemption". Kids and teenagers are watching TV shows such as "Peppa Pig", "Johnny Test", "Wizards of Waverly Place" and "Glee". Popular toys at the moment include the likes of the Xbox 360, the PlayStation 3, ZhuZhu Pets and the iPad.

These are trending news stories and fads that were prevalent at this time. These are topics that would have been in the media on December 30th, 2010.

Check out our personality summary for people who were born on December 30th, 2010.

If you are looking for some childhood nostalgia, then you should check out December 30th, 2016 instead.

Barack Obama was the President of the United States on December 30th, 2010.

David Cameron was the Prime Minister of the United Kingdom on December 30th, 2010.

Enter your date of birth below to find out how old you were on December 30th, 2010.
This information is not transmitted to our server.

Here are some fun statistics about December 30th, 2010.