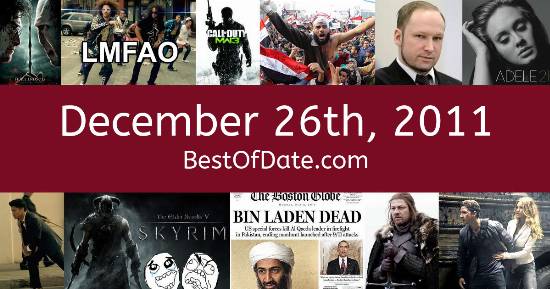 Songs that were on top of the music singles charts in the USA and the United Kingdom on December 26th, 2011.

The date is December 26th, 2011 and it's a Monday. Anyone born today will have the star sign Capricorn. Christmas Day of 2011 has just passed and many people are relaxing at home and enjoying the holiday season.

In America, the song We Found Love by Rihanna ft Calvin Harris is on top of the singles charts. Over in the UK, Wherever You Are by Military Wives & Gary Malone is the number one hit song. Barack Obama is currently the President of the United States and the movie Sherlock Holmes 2 is at the top of the Box Office.

The slang phrase YOLO (You only live once) was beginning to rise in popularity at this time. North Korean leader Kim Jong-il has died of a suspected heart attack. There is a sense of amusement at footage of North Korean mourners wailing. The footage has led many commentators to conclude that their over-the-top grief is being faked out of fear. In soccer, Russian billionaire Dmitry Rybolovlev has just taken over AS Monaco. Following the successes of "sugar daddy" clubs such as Chelsea, Manchester City and PSG, many people believe that Rybolovlev's takeover may transform Monaco into a European powerhouse.

If you were to travel back to this day, notable figures such as Whitney Houston, Edd Gould, MCA and Rodney King would all be still alive. On TV, people are watching popular shows such as "Two and a Half Men", "Gossip Girl", "Glee" and "White Collar". Meanwhile, gamers are playing titles such as "Farmville", "Dead Space 2", "Crysis 2" and "Saints Row: The Third".

Children and teenagers are currently watching television shows such as "Dora the Explorer", "Ben 10", "Mickey Mouse Clubhouse" and "Jessie". If you're a kid or a teenager, then you're probably playing with toys such as the PlayStation 3, the KidiZoom Camera, the iPad and the LeapPad Explorer.

If you are looking for some childhood nostalgia, then check out December 26th, 2017 instead.

Barack Obama was the President of the United States on December 26th, 2011.

David Cameron was the Prime Minister of the United Kingdom on December 26th, 2011.

Enter your date of birth below to find out how old you were on December 26th, 2011.

Here are some fun statistics about December 26th, 2011.