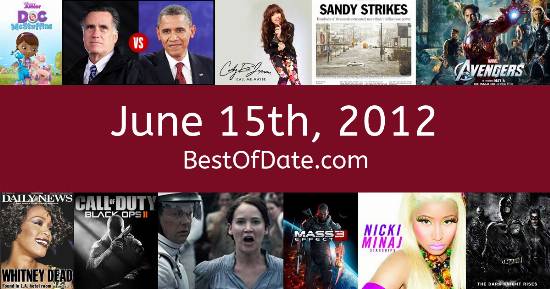 Songs that were on top of the music singles charts in the USA and the United Kingdom on June 15th, 2012.

The date is June 15th, 2012 and it's a Friday. Anyone born today will have the star sign Gemini. Currently, people have "that Friday feeling" and are looking forward to the weekend.

It's summer, so the temperatures are warmer and the evenings are longer than usual. In America, the song Somebody That I Used To Know by Gitye ft Kimbra is on top of the singles charts. Over in the UK, Sing by Gary Barlow & Commonwealth Band is the number one hit song.

Barack Obama is currently the President of the United States and the movie Madagascar 3 is at the top of the Box Office. In the United Kingdom, David Cameron is the current Prime Minister. Video rental stores such as Blockbuster are continuing to close their doors at the moment. This is due to the increasing popularity of online streaming services such as Netflix and Hulu.

The hit song "Call Me Maybe" by Carly Rae Jepsen is currently the subject of a number of parody and lip dub videos. A Youtube video by Laina Morris parodying an "Overly Attached Girlfriend" is currently going viral at the moment. The success of the video has led to "Overly Attached Girlfriend" becoming a meme. In Poland and Ukraine, the 2012 UEFA European Football Championship is taking place.

Actor David Arquette has filed for divorce from Friends star Courtney Cox following two years of separation. TMZ is reporting that rapper Drake and his entourage have been involved in a scuffle with Chris Brown at a nightclub in New York City. On TV, people are watching popular shows such as "CSI: NY", "The Office", "How I Met Your Mother" and "The Vampire Diaries".

Meanwhile, gamers are playing titles such as "Terraria", "Batman: Arkham City", "Saints Row: The Third" and "DayZ (mod)". Children and teenagers are currently watching television shows such as "The Fairly OddParents", "Peppa Pig", "Curious George" and "Team Umizoomi". If you're a kid or a teenager, then you're probably playing with toys such as the Xbox 360, the PlayStation 3, the LeapPad Explorer and Skylanders Giants figures.

If you are looking for some childhood nostalgia, then check out June 15th, 2018 instead.

Barack Obama was the President of the United States on June 15th, 2012.

David Cameron was the Prime Minister of the United Kingdom on June 15th, 2012.