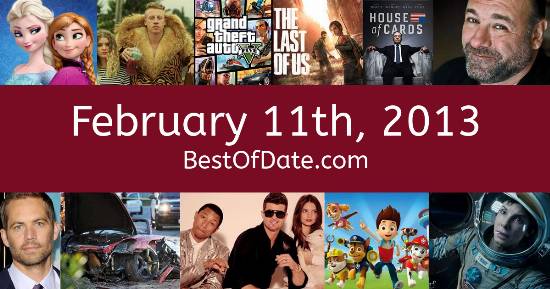 Songs that were on top of the music singles charts in the USA and the United Kingdom on February 11th, 2013:

The date is February 11th, 2013 and it's a Monday. Anyone born today will have the star sign Aquarius. Valentine's Day is just around the corner.

In America, the song Thrift Shop by Macklemore & Ryan Lewis is on top of the singles charts. Over in the UK, I Could Be The One by Avicii is the number one hit song. Barack Obama is currently the President of the United States and the movie Identity Thief is at the top of the Box Office.

An Internet meme called "The Harlem Shake" is currently going viral. The first season of a new show called "House of Cards" has just been released on Netflix. Joseph Aloisius Ratzinger has unexpectantly announced that he will retire as Pope Benedict XVI. In doing so, he will become the first Pope to step down in over 600 years. Meanwhile, entertainment websites are reporting the tragic news that Storage Wars cast member Mark Balelo has committed suicide.

Celebrities, historical figures and noteable people who were born on the 11th of February:

National holidays and famous events that fall on the 11th of February:

Who was the Prime Minister of the United Kingdom on February 11th, 2013?

Enter your date of birth below to find out how old you were on February 11th, 2013.

Looking for some nostalgia? Here are some Youtube videos relating to February 11th, 2013. Please note that videos are automatically selected by Youtube and that results may vary! Click on the "Load Next Video" button to view the next video in the search playlist. In many cases, you'll find episodes of old TV shows, documentaries, music videos and soap dramas.

Here are some fun statistics about February 11th, 2013.