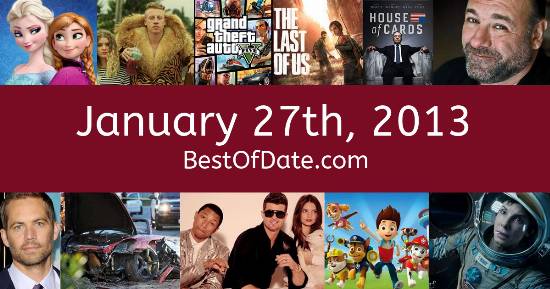 On January 27th, 2013, the following songs were at the top of the music charts in the USA and the UK.

The top "Box Office" movie on this date was the film "Hansel and Gretel".

The date is January 27th, 2013, and it's a Sunday. Anyone born today will have the star sign Aquarius. Currently, people are enjoying their weekend.

In America, the song Locked Out Of Heaven by Bruno Mars is on top of the singles charts. Over in the UK, Get Up by Bingo Players is the number one hit song. Barack Obama is currently the President of the United States, and the movie Hansel and Gretel is at the top of the Box Office.

A new video-hosting service called "Vine" has just been launched. In Ireland, the nation is mourning the death of Detective Garda Adrian Donohoe, who was recently shot dead by an armed gang in County Louth. A tragic fire at a nightclub in Santa Maria, Brazil has left 242 people dead.

If you were to travel back to this day, notable figures such as Chris Kyle, Reeva Steenkamp, Hugo Chavez and James Gandolfini would all be still alive. On TV, people are watching popular shows such as "Boardwalk Empire", "The Walking Dead", "Game of Thrones" and "Black Mirror". Meanwhile, gamers are playing titles such as "Mark of the Ninja", "Borderlands 2", "Call of Duty: Black Ops II" and "DmC: Devil May Cry".

Children and teenagers are currently watching television shows such as "The Fairly OddParents", "Peppa Pig", "Curious George" and "Team Umizoomi". If you're a kid or a teenager, then you're probably playing with toys such as the Xbox 360, the PlayStation 3, Skylanders Giants figures and the Wii U.

These are trending news stories and fads that were prevalent at this time. These are topics that would have been in the media on January 27th, 2013.

News stories, pop culture trends, and other events that happened around January 27th, 2013.

Check out our personality summary for people who were born on January 27th, 2013.

Television shows that people were watching in January, 2013.

Popular video games that people were playing in January of 2013.

If you are looking for some childhood nostalgia, then you should check out January 27th, 2019, instead.

Celebrities, historical figures, and other notable people who were born on January 27th.

Barack Obama was the President of the United States on January 27th, 2013.

Find out what your age was on January 27th, 2013, by entering your DOB below.
This information is not saved on our server.

Here are some fun statistics about January 27th, 2013.