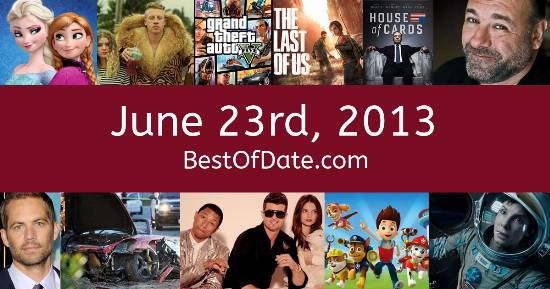 On June 23rd, 2013, the following songs were at the top of the music charts in the USA and the UK.

The top "Box Office" movie on this date was the film "Man of Steel".

The date is June 23rd, 2013, and it's a Sunday. Anyone born today will have the star sign Cancer. Currently, people are enjoying their weekend.

It's summer, so the temperatures are warmer and the evenings are longer than usual. The song Blurred Lines by Robin Thicke is on top of the singles charts in both the USA and the United Kingdom. Barack Obama is currently the President of the United States, and the movie Man of Steel is at the top of the Box Office.

The game "Last of Us" has been released on the PlayStation 3. Avicii has released his single "Wake Me Up". Danielle Bradbery has just won the fourth season of The Voice.

Tributes are pouring in following the sudden death of actor James Gandolfini, who was best known for his role as Tony Soprano. The Miami Heat have won the 2013 NBA Finals after beating the San Antonio Spurs in the seventh game. If you were to travel back to this day, notable figures such as Cory Monteith, Gia Allemand, Lisa Robin Kelly and Lee Thompson Young would all be still alive.

On TV, people are watching popular shows such as "The Big Bang Theory", "Community", "Once Upon a Time" and "Black Mirror". Meanwhile, gamers are playing titles such as "The Walking Dead", "Clash of Clans", "Halo 4" and "The Last of Us". Children and teenagers are currently watching television shows such as "Curious George", "Phineas and Ferb", "Jake and the Never Land Pirates" and "Dog with a Blog".

If you're a kid or a teenager, then you're probably playing with toys such as the Xbox 360, the PlayStation 3, Skylanders Giants figures and the Wii U.

These are trending news stories and fads that were prevalent at this time. These are topics that would have been in the media on June 23rd, 2013.

News stories and other events that happened around June 23rd, 2013.

Check out our personality summary for people who were born on June 23rd, 2013.

Television shows that people were watching in June, 2013.

Popular video games that people were playing in June of 2013.

If you are looking for some childhood nostalgia, then you should check out June 23rd, 2019 instead.

Barack Obama was the President of the United States on June 23rd, 2013.

David Cameron was the Prime Minister of the United Kingdom on June 23rd, 2013.

Find out what your age was on June 23rd, 2013, by entering your DOB below.
This information is not saved on our server.