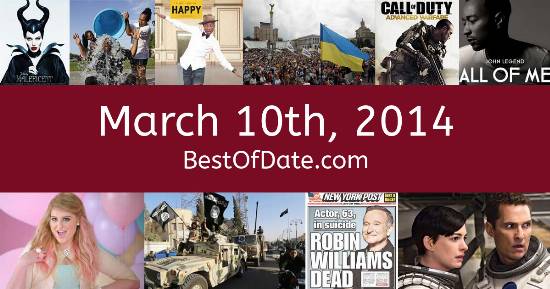 These songs were on top of the music charts in the United States and the United Kingdom on March 10th, 2014.

The date is March 10th, 2014, and it's a Monday. Anyone born today will have the star sign Pisces. Spring has started to creep in and the days are beginning to get longer.

The song Happy by Pharrell Williams is on top of the singles charts in both the USA and the United Kingdom. Barack Obama is currently the President of the United States, and the movie 300: Rise of An Empire is at the top of the Box Office. In the United Kingdom, David Cameron is the current Prime Minister.

A new Internet slang phrase called "Sliding into your DMs" is becoming popular at the moment. Malaysia Airlines Flight 370 recently disappeared from radar and there has been zero trace of the missing aircraft despite a widespread search. If you were to travel back to this day, notable figures such as Peaches Geldof, The Ultimate Warrior, Robin Williams and Richard Attenborough would all be still alive.

On TV, people are watching popular shows such as "RuPaul's Drag Race", "Suits", "American Horror Story" and "Orange Is the New Black". Meanwhile, gamers are playing titles such as "Clash of Clans", "BioShock Infinite", "Pokémon X and Y" and "Rust". Kids and teenagers are watching TV shows such as "Team Umizoomi", "Jake and the Never Land Pirates", "Dog with a Blog" and "Paw Patrol".

Popular toys at the moment include the likes of the Wii U, Rainbow Loom, the Furby Boom and the PlayStation 4.

These are trending news stories and fads that were prevalent at this time. These are topics that would have been in the media on March 10th, 2014.

Check out our personality summary for people who were born on March 10th, 2014.

Television shows that people were watching in March, 2014.

Popular video games that people were playing in March of 2014.

If you are looking for some childhood nostalgia, then you should check out March 10th, 2020 instead.

Al-Qaeda Founder. Deceased
Born on March 10th, 1957
He was not alive on this date.

Barack Obama was the President of the United States on March 10th, 2014.

David Cameron was the Prime Minister of the United Kingdom on March 10th, 2014.

Enter your date of birth below to find out how old you were on March 10th, 2014.
This information is not transmitted to our server.