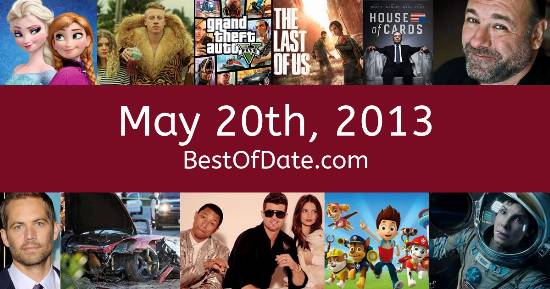 Songs that were on top of the music singles charts in the USA and the United Kingdom on May 20th, 2013.

The date is May 20th, 2013 and it's a Monday. Anyone born today will have the star sign Taurus. The summer of 2013 has finally arrived. The weather has warmed up and the evenings are brighter than usual.

In America, the song Can't Hold Us by Macklemore & Ryan Lewis is on top of the singles charts. Over in the UK, La La La by Naughty Boy is the number one hit song. Barack Obama is currently the President of the United States and the movie Star Trek Into Darkness is at the top of the Box Office.

Real Madrid have announced that manager Jose Mourinho will be leaving the club. There is now speculation about which club he will join next. On TV, people are watching popular shows such as "RuPaul's Drag Race", "The Vampire Diaries", "White Collar" and "House of Cards". Meanwhile, gamers are playing titles such as "Borderlands 2", "Aliens: Colonial Marines", "BioShock Infinite" and "Metro: Last Light".

Children and teenagers are currently watching television shows such as "Peppa Pig", "LazyTown", "Curious George" and "Doc McStuffins". Popular toys at the moment include the likes of the Xbox 360, the PlayStation 3 and the Wii U.

Notable events that occurred around May 20th, 2013.

Historical weather information for May 20th, 2013.

Barack Obama was the President of the United States on May 20th, 2013.

David Cameron was the Prime Minister of the United Kingdom on May 20th, 2013.