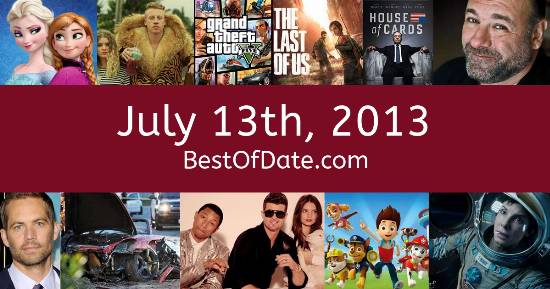 Songs that were on top of the music singles charts in the USA and the United Kingdom on July 13th, 2013.

The date is July 13th, 2013 and it's a Saturday. Anyone born today will have the star sign Cancer. Currently, people are enjoying their weekend.

It's summer, so the temperatures are warmer and the evenings are longer than usual. The song Blurred Lines by Robin Thicke is on top of the singles charts in both the USA and the United Kingdom. Barack Obama is currently the President of the United States and the movie Despicable Me 2 is at the top of the Box Office.

A social networking website called Vine is extremely popular at the moment. Former NSA contractor Edward Snowden has just revealed to the public that American intelligence agencies have been running a widespread global surveillance programme called PRISM. In Florida, George Zimmerman has been found not guilty of the murder of Trayvon Martin.

People are saddened by the news that Glee actor Cory Monteith has died following a drug overdose. On TV, people are watching popular shows such as "Two and a Half Men", "How I Met Your Mother", "Black Mirror" and "House of Cards". Meanwhile, gamers are playing titles such as "Sleeping Dogs", "Halo 4", "Dead Space 3" and "The Last of Us".

Kids and teenagers are watching TV shows such as "Peppa Pig", "Curious George", "Big Time Rush" and "Jessie". Popular toys at the moment include the likes of the Xbox 360, the PlayStation 3 and the Wii U.

If you are looking for some childhood nostalgia, then check out July 13th, 2019 instead.

Barack Obama was the President of the United States on July 13th, 2013.

David Cameron was the Prime Minister of the United Kingdom on July 13th, 2013.