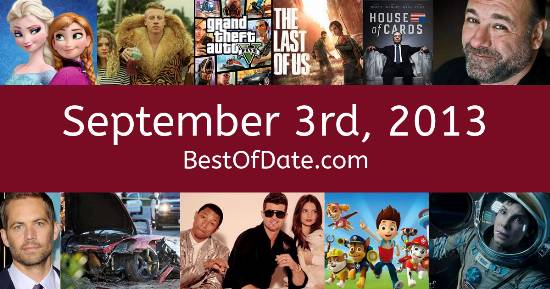 Events that occurred on September 3rd, 2013:

Songs that were on top of the music singles charts in the USA and the United Kingdom on September 3rd, 2013:

The date is September 3rd, 2013 and it's a Tuesday. Anyone born today will have the star sign Virgo. Schools have started back and autumn has arrived, so temperatures have started to cool and trees are beginning to shed their leaves.

In America, the song Blurred Lines by Robin Thicke is on top of the singles charts. Over in the UK, Roar by Katy Perry is the number one hit song. Barack Obama is currently the President of the United States and the movie One Direction: This is Us is at the top of the Box Office.

Video game fans are currently excited about the upcoming release of Grand Theft Auto V. The game, which will take place in San Andreas, is set to be released on September 17th. A new Internet meme called "Doge", which consists of an image of a Shiba Inu dog with broken English written on it, is being shared online at the moment. Microsoft have announced that they will be purchasing Nokia's phone business.

In music news, a new pop singer called Ariana Grande has just released her debut album "Yours Truly". The album contains songs such as "The Way" and "Baby I". On TV, people are watching popular shows such as "Prison Break", "Breaking Bad", "Modern Family" and "Homeland". Meanwhile, gamers are playing titles such as "Borderlands 2", "Aliens: Colonial Marines", "Tomb Raider" and "Metro: Last Light".

Kids and teenagers are watching TV shows such as "Curious George", "Team Umizoomi", "Good Luck Charlie" and "Doc McStuffins". Popular toys include the likes of "Xbox 360", "PlayStation 3" and "The Wii U".

Celebrities, historical figures and noteable people who were born on the 3rd of September:

Who was the Prime Minister of the United Kingdom on September 3rd, 2013?

Enter your date of birth below to find out how old you were on September 3rd, 2013.

Looking for some nostalgia? Here are some Youtube videos relating to September 3rd, 2013. Please note that videos are automatically selected by Youtube and that results may vary! Click on the "Load Next Video" button to view the next video in the search playlist. In many cases, you'll find episodes of old TV shows, documentaries, music videos and soap dramas.

Here are some fun statistics about September 3rd, 2013.