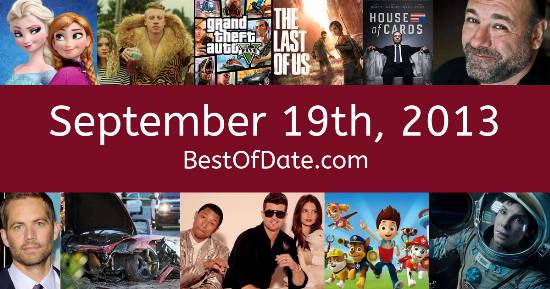 Songs that were on top of the music singles charts in the USA and the United Kingdom on September 19th, 2013:

The date is September 19th, 2013 and it's a Thursday. Anyone born today will have the star sign Virgo. Schools have started back and autumn has arrived, so temperatures have started to cool and trees are beginning to shed their leaves.

The earthy smells of fall have started to fill the air. In America, the song Roar by Katy Perry is on top of the singles charts. Over in the UK, Talk Dirty by Jason Derulo is the number one hit song.

Barack Obama is currently the President of the United States and the movie Insidious Chapter 2 is at the top of the Box Office. In the United Kingdom, David Cameron is the current Prime Minister. It's 2013, so the music charts are being dominated by artists such as Macklemore, Robin Thicke, Imagine Dragons and Bruno Mars.

A social networking website called Vine is extremely popular at the moment. A new Internet meme called "Doge", which consists of an image of a Shiba Inu dog with broken English written on it, is being shared online at the moment. A new show called "Peaky Blinders" has just debuted on Netflix.

In Ireland, there is shock at the news that the body of missing woman Elaine O'Hara has been discovered in the foothills of the Dublin Mountains. Elaine had been missing since August of last year. Meanwhile, it has just been announced that the country has officially exited its recession. In celebrity news, NBA star LeBron James has married Savannah Brinson. Twelve people have been tragically killed following a mass shooting at the Washington Navy Yard shooting.

The highly-anticipated game "Grand Theft Auto V" has just been released. People are watching popular TV shows such as "Dora the Explorer", "Sons of Anarchy", "Suits" and "Peaky Blinders". Meanwhile, gamers are playing titles such as "BioShock Infinite", "The Last of Us", "Saints Row IV" and "Grand Theft Auto V".

Children and teenagers are currently watching television shows such as "Good Luck Charlie", "Jake and the Never Land Pirates", "Jessie" and "Dog with a Blog". Popular toys include the likes of "Xbox 360", "PlayStation 3" and "The Wii U".

Celebrities, historical figures and noteable people that were born on the 19th of September:

Who was the Prime Minister of the United Kingdom on September 19th, 2013?

Enter your date of birth below to find out how old you were on September 19th, 2013.

Looking for some nostalgia? Here are some Youtube videos relating to September 19th, 2013. Please note that videos are automatically selected by Youtube and that results may vary! Click on the "Load Next Video" button to view the next video in the search playlist. In many cases, you'll find episodes of old TV shows, documentaries, music videos and soap dramas.

Here are some fun statistics about September 19th, 2013.