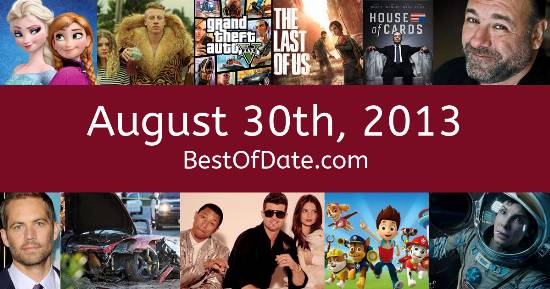 Songs that were on top of the music singles charts in the USA and the United Kingdom on August 30th, 2013:

The date is August 30th, 2013 and it's a Friday. Anyone born today will have the star sign Virgo. Currently, people have "that Friday feeling" and are looking forward to the weekend.

The summer of 2013 is coming to an end and fall is just around the corner. In America, the song Blurred Lines by Robin Thicke is on top of the singles charts. Over in the UK, Burn by Ellie Goulding is the number one hit song.

Barack Obama is currently the President of the United States and the movie One Direction: This is Us is at the top of the Box Office. In the United Kingdom, David Cameron is the current Prime Minister. It's 2013, so the music charts are being dominated by artists such as Macklemore, Robin Thicke, Imagine Dragons and Bruno Mars.

Hundreds of people have been left dead following a chemical attack on rebel-controlled areas in Ghouta, Syria. The attack is receiving widespread condemnation across the world. In soccer, Brazilian footballer Willian has just signed for Chelsea despite earlier reports that he was expected to join Tottenham. In music, Justin Timberlake's music video "Mirrors" has just been crowned as the winner at the 2013 MTV Video Music Awards. People are watching popular TV shows such as "How I Met Your Mother", "RuPaul's Drag Race", "Glee" and "Homeland".

Meanwhile, gamers are playing titles such as "Call of Duty: Black Ops II", "Dead Space 3", "Aliens: Colonial Marines" and "The Last of Us". Kids and teenagers are watching TV shows such as "Dora the Explorer", "Curious George", "Team Umizoomi" and "Paw Patrol". If you're a kid or a teenager, then you're probably playing with toys such as "Xbox 360", "PlayStation 3" and "The Wii U".

Celebrities and historical figures that were born on the 30th of August:

Who was the Prime Minister of the United Kingdom on August 30th, 2013?

Enter your date of birth below to find out how old you were on August 30th, 2013.

Looking for some nostalgia? Here are some Youtube videos relating to August 30th, 2013. Please note that videos are automatically selected by Youtube and that results may vary! Click on the "Load Next Video" button to view the next video in the search playlist. In many cases, you'll find episodes of old TV shows, documentaries, music videos and soap dramas.