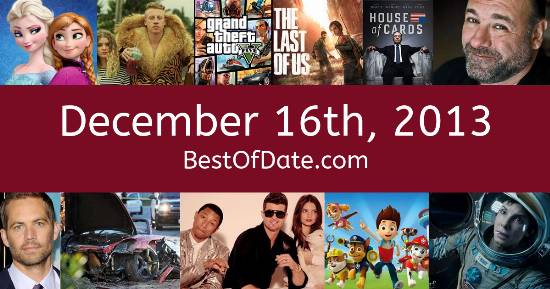 These songs were on top of the music charts in the United States and the United Kingdom on December 16th, 2013.

Wow, I still remember how excited I was when Day-Z dropped. I think that I had just got home from work. It came out of the blue. It's just a pity that it never lived up to the hype. I spent hours and hours playing the mod version.
Posted on August 8th, 2021 12:55

The date is December 16th, 2013, and it's a Monday. Anyone born today will have the star sign Sagittarius. The Christmas season of 2013 is in full swing. People are putting up their decorations and festive songs are playing on the radio.

If you were to travel back to this day, notable figures such as James Avery, Ariel Sharon, Philip Seymour Hoffman and Viscera would all be still alive. On TV, people are watching popular shows such as "How I Met Your Mother", "Sons of Anarchy", "Suits" and "American Horror Story". Meanwhile, gamers are playing titles such as "Clash of Clans", "XCOM: Enemy Unknown", "Saints Row IV" and "Tom Clancy's Splinter Cell: Blacklist".

Kids and teenagers are watching TV shows such as "Peppa Pig", "Johnny Test", "Phineas and Ferb" and "Good Luck Charlie". If you're a kid or a teenager, then you're probably playing with toys such as the Wii U, Rainbow Loom, the PlayStation 4 and the Xbox One.

These are trending news stories and fads that were prevalent at this time. These are topics that would have been in the media on December 16th, 2013.

Check out our personality summary for people who were born on December 16th, 2013.

If you are looking for some childhood nostalgia, then you should check out December 16th, 2019 instead.

Stand-up comedian. Deceased
Born on December 16th, 1961
He was not alive on this date.

Barack Obama was the President of the United States on December 16th, 2013.

David Cameron was the Prime Minister of the United Kingdom on December 16th, 2013.

Enter your date of birth below to find out how old you were on December 16th, 2013.
This information is not transmitted to our server.

Here are some fun statistics about December 16th, 2013.