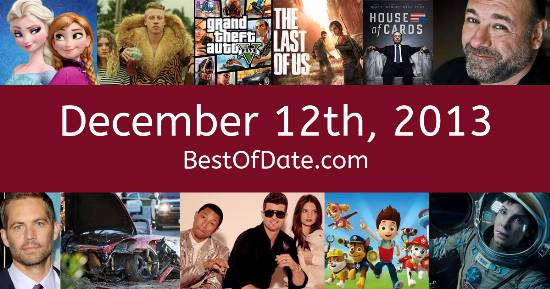 Songs that were on top of the music singles charts in the USA and the United Kingdom on December 12th, 2013.

The date is December 12th, 2013 and it's a Thursday. Anyone born today will have the star sign Sagittarius. The Christmas season of 2013 is in full swing. The decorations are up and festive songs are playing on the radio.

In America, the song Wrecking Ball by Miley Cyrus is on top of the singles charts. Over in the UK, Somewhere Only We Know by Lily Allen is the number one hit song. Barack Obama is currently the President of the United States and the movie Frozen is at the top of the Box Office.

A mobile game called "Flappy Bird" is currently surging in popularity. Tributes are pouring in from around the world following the recent death of anti-apartheid leader Nelson Mandela. Westlife singer Kian Egan has just won the UK version of "I'm a Celebrity... Get Me Out of Here!".

On TV, people are watching popular shows such as "Sons of Anarchy", "RuPaul's Drag Race", "The Walking Dead" and "Game of Thrones". Meanwhile, gamers are playing titles such as "DmC: Devil May Cry", "The Last of Us", "Batman: Arkham Origins" and "Dead Rising 3". Children and teenagers are currently watching television shows such as "Dora the Explorer", "Mickey Mouse Clubhouse", "Phineas and Ferb" and "Team Umizoomi".

If you're a kid or a teenager, then you're probably playing with toys such as the Wii U, the PlayStation 4 and the Xbox One.

If you are looking for some childhood nostalgia, then check out December 12th, 2019 instead.

Celebrities, historical figures and notable people who were born on the 12th of December.

Barack Obama was the President of the United States on December 12th, 2013.

David Cameron was the Prime Minister of the United Kingdom on December 12th, 2013.

Enter your date of birth below to find out how old you were on December 12th, 2013.

Here are some fun statistics about December 12th, 2013.