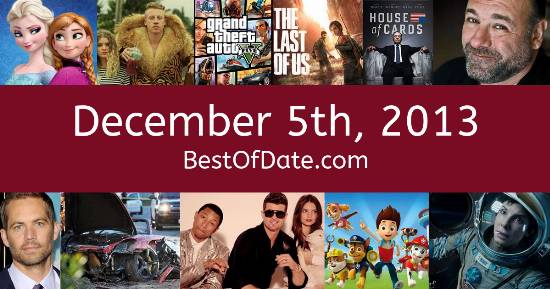 Songs that were on top of the music singles charts in the USA and the United Kingdom on December 5th, 2013.

The movie "Catching Fire" was at the top of the Box Office on December 5th, 2013.

The date is December 5th, 2013, and it's a Thursday. Anyone born today will have the star sign Sagittarius. The Christmas season of 2013 has began.

In America, the song Royals by Lorde is on top of the singles charts. Over in the UK, Somewhere Only We Know by Lily Allen is the number one hit song. Barack Obama is currently the President of the United States, and the movie Catching Fire is at the top of the Box Office.

The cryptocurrency "Bitcoin" has just passed $1,000 USD for the first time. The world is in shock following the death of actor Paul Walker in a car crash. A mobile game called "Flappy Bird" is currently surging in popularity.

British diver Tom Daley has come out as gay in a recent Youtube video. Tributes are pouring in from around the world following the recent death of anti-apartheid leader Nelson Mandela. If you were to travel back to this day, notable figures such as Nelson Mandela, James Avery, Ariel Sharon and Philip Seymour Hoffman would all be still alive.

On TV, people are watching popular shows such as "Grey's Anatomy", "Bones", "Sons of Anarchy" and "Homeland". Meanwhile, gamers are playing titles such as "Minecraft", "Clash of Clans", "Guild Wars 2" and "Dota 2". Kids and teenagers are watching TV shows such as "Curious George", "Phineas and Ferb", "Austin & Ally" and "Lab Rats: Bionic Island".

If you're a kid or a teenager, then you're probably playing with toys such as Skylanders Giants figures, Rainbow Loom, the Furby Boom and the PlayStation 4.

These are trending news stories and fads that were prevalent at this time. These are topics that would have been in the media on December 5th, 2013.

News stories and other events that happened around December 5th, 2013.

Check out our personality summary for people who were born on December 5th, 2013.

If you are looking for some childhood nostalgia, then you should check out December 5th, 2019 instead.

Barack Obama was the President of the United States on December 5th, 2013.

David Cameron was the Prime Minister of the United Kingdom on December 5th, 2013.

Find out what your age was on December 5th, 2013, by entering your DOB below.
This information is not saved on our server.

Here are some fun statistics about December 5th, 2013.