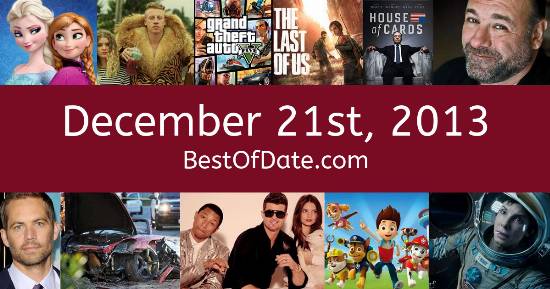 These songs were on top of the music charts in the United States and the United Kingdom on December 21st, 2013.

The top "Box Office" movie on this date was the film "Frozen".

The date is December 21st, 2013, and it's a Saturday. Anyone born today will have the star sign Sagittarius. Currently, people are enjoying their weekend.

Christmas Day of 2013 is fast approaching and the excitement is building. Department stores are thronged with Christmas shoppers. In America, the song The Monster by Eminem ft Rihanna is on top of the singles charts. Over in the UK, Skyscraper by Sam Bailey is the number one hit song.

Sony's video game console the "PlayStation 4" has just been released. Meanwhile, Microsoft has also released its competing console the "XBox One". A mobile game called "Flappy Bird" is currently surging in popularity. Ireland has just exited the eurozone's bailout programme. Meanwhile, Sam Bailey has been crowned as the winner of the tenth season of "The X Factor".

The standalone version of the game "DayZ" has just been released. Meanwhile, in soccer, Tottenham Hotspur have decided to sack manager Andre Villas-Boas. The decision comes in the aftermath of Tottenham's humiliating 5-0 home defeat to Liverpool. Tessanne Chin has just won the fifth season of The Voice. If you were to travel back to this day, notable figures such as James Avery, Ariel Sharon, Philip Seymour Hoffman and Viscera would all be still alive.

On TV, people are watching popular shows such as "Two and a Half Men", "Prison Break", "The Big Bang Theory" and "Suits". Meanwhile, gamers are playing titles such as "Guild Wars 2", "Dead Space 3", "Saints Row IV" and "Pokémon X and Y". Children and teenagers are currently watching television shows such as "The Fairly OddParents", "Horrid Henry", "WordGirl" and "Glee".

Popular toys at the moment include the likes of the Wii U, Rainbow Loom, the PlayStation 4 and the Xbox One.

These are trending news stories and fads that were prevalent at this time. These are topics that would have been in the media on December 21st, 2013.

News stories and other events that happened around December 21st, 2013.

Check out our personality summary for people who were born on December 21st, 2013.

If you are looking for some childhood nostalgia, then you should check out December 21st, 2019 instead.

Barack Obama was the President of the United States on December 21st, 2013.

David Cameron was the Prime Minister of the United Kingdom on December 21st, 2013.

Find out what your age was on December 21st, 2013, by entering your DOB below.
This information is not saved on our server.

Here are some fun statistics about December 21st, 2013.