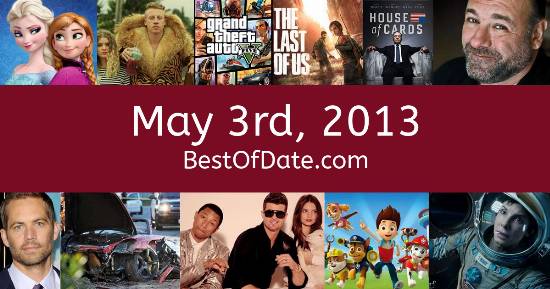 Songs that were on top of the music singles charts in the USA and the United Kingdom on May 3rd, 2013.

The date is May 3rd, 2013, and it's a Friday. Anyone born today will have the star sign Taurus. Currently, people have "that Friday feeling" and are looking forward to the weekend.

The summer of 2013 has finally arrived. The weather has warmed up and the evenings are brighter than usual. In America, the song Just Give Me A Reason by Pink ft Nate Ruess is on top of the singles charts. Over in the UK, Get Lucky by Daft Punk is the number one hit song.

Barack Obama is currently the President of the United States, and the movie Pain and Gain is at the top of the Box Office. In the United Kingdom, David Cameron is the current Prime Minister. Video rental stores such as Blockbuster are continuing to close their doors at the moment. This is due to the increasing popularity of online streaming services such as Netflix and Hulu.

It's 2013, so the music charts are being dominated by artists such as Macklemore, Robin Thicke, Imagine Dragons and Bruno Mars. In celebrity news, former NBA star Michael Jordan and Cuban-American model Yvette Prieto have been married in Florida. Windows Live Messenger (MSN Messenger) has just been discontinued and people are reminiscing about how they used the program to chat with friends "back in the day".

If you were to travel back to this day, notable figures such as James Gandolfini, Cory Monteith, Gia Allemand and Lisa Robin Kelly would all be still alive. On TV, people are watching popular shows such as "Futurama", "How I Met Your Mother", "Skins" and "The Walking Dead". Meanwhile, gamers are playing titles such as "Guild Wars 2", "Borderlands 2", "XCOM: Enemy Unknown" and "DmC: Devil May Cry".

Kids and teenagers are watching TV shows such as "Phineas and Ferb", "Team Umizoomi", "Jessie" and "Doc McStuffins". If you're a kid or a teenager, then you're probably playing with toys such as the Xbox 360, the PlayStation 3, Skylanders Giants figures and the Wii U.

These are trending news stories and fads that were prevalent at this time. These are topics that would have been in the media on May 3rd, 2013.

News stories and other events that happened around May 3rd, 2013.

Check out our personality summary for people who were born on May 3rd, 2013.

Television shows that people were watching in May, 2013.

Popular video games that people were playing in May of 2013.

If you are looking for some childhood nostalgia, then you should check out May 3rd, 2019 instead.

Historical weather information for May 3rd, 2013.

Barack Obama was the President of the United States on May 3rd, 2013.

David Cameron was the Prime Minister of the United Kingdom on May 3rd, 2013.

Find out what your age was on May 3rd, 2013, by entering your DOB below.
This information is not saved on our server.