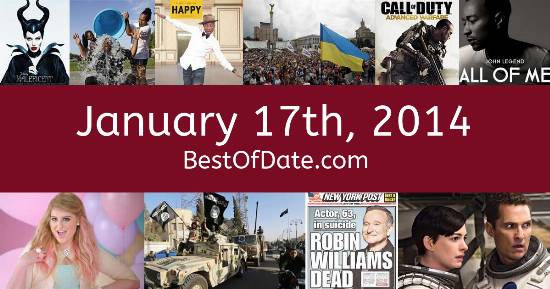 These songs were on top of the music charts in the United States and the United Kingdom on January 17th, 2014.

Play the top singles from the year 2014.
A Spotify playlist of songs from 2014. Let us bring you back to the peak days of Pharrell Williams, Katy Perry, Sam Smith and Sia.

The movie "Lone Survivor" was at the top of the Box Office on this day.

The date is January 17th, 2014, and it's a Friday. Anyone born today will have the star sign Capricorn. Currently, people have "that Friday feeling" and are looking forward to the weekend.

In America, the song The Monster by Eminem ft Rihanna is on top of the singles charts. Over in the UK, Timber by Pitbull featuring Kesha is the number one hit song. Barack Obama is currently the President of the United States, and the movie Lone Survivor is at the top of the Box Office.

Cristiano Ronaldo has beaten Lionel Messi and Franck Ribery to become the Ballon d'Or winner for 2013. Serbian midfielder Nemanja Matić has joined English side Chelsea for a fee of £21 million. If you were to travel back to this day, notable figures such as Philip Seymour Hoffman, Viscera, Peaches Geldof and The Ultimate Warrior would all be still alive.

On TV, people are watching popular shows such as "RuPaul's Drag Race", "Glee", "House of Cards" and "Peaky Blinders". Meanwhile, gamers are playing titles such as "Minecraft", "Pokémon X and Y", "Call of Duty: Ghosts" and "DayZ". Kids and teenagers are watching TV shows such as "Peppa Pig", "Mickey Mouse Clubhouse", "Phineas and Ferb" and "Jessie".

If you're a kid or a teenager, then you're probably playing with toys such as the Furby Boom, the PlayStation 4, the Xbox One and Frozen dolls.

These are trending news stories and fads that were prevalent at this time. These are topics that would have been in the media on January 17th, 2014.

News stories and other events that happened around January 17th, 2014.

Check out our personality summary for people who were born on January 17th, 2014.

If you are looking for some childhood nostalgia, then you should check out January 17th, 2020 instead.

Barack Obama was the President of the United States on January 17th, 2014.

David Cameron was the Prime Minister of the United Kingdom on January 17th, 2014.

Find out what your age was on January 17th, 2014, by entering your DOB below.
This information is not saved on our server.

Here are some fun statistics about January 17th, 2014.