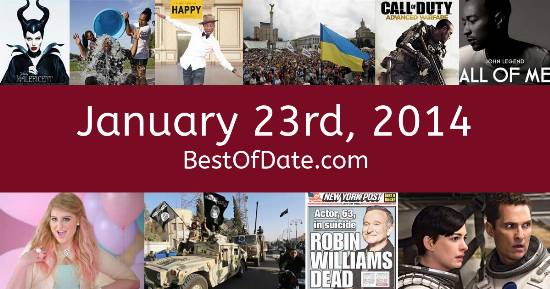 Songs that were on top of the music singles charts in the USA and the United Kingdom on January 23rd, 2014:

The date is January 23rd, 2014 and it's a Thursday. Anyone born today will have the star sign Aquarius. In America, the song Timber by Pitbull featuring Kesha is on top of the singles charts.

It is 2014, so the music charts are being dominated by artists such as Pharrell Williams, Katy Perry, John Legend, Iggy Azalea, Meghan Trainor, Lorde and Jason Derulo. Justin Bieber is in the news after being arrested on suspicion of drink driving in Miami Beach. People are watching popular TV shows such as "Sons of Anarchy", "RuPaul's Drag Race", "Glee" and "American Horror Story".

Meanwhile, gamers are playing titles such as "The Last of Us", "Dota 2", "Tom Clancy's Splinter Cell: Blacklist" and "ARMA 3". Kids and teenagers are watching TV shows such as "Curious George", "Glee", "Dog with a Blog" and "Paw Patrol". If you're a kid or a teenager, then you're probably playing with toys such as "The Wii U", "PlayStation 4", "Xbox One" and "Frozen dolls".

Celebrities, historical figures and noteable people that were born on the 23rd of January:

Who was the Prime Minister of the United Kingdom on January 23rd, 2014?

Enter your date of birth below to find out how old you were on January 23rd, 2014.

Looking for some nostalgia? Here are some Youtube videos relating to January 23rd, 2014. Please note that videos are automatically selected by Youtube and that results may vary! Click on the "Load Next Video" button to view the next video in the search playlist. In many cases, you'll find episodes of old TV shows, documentaries, music videos and soap dramas.

Here are some fun statistics about January 23rd, 2014.