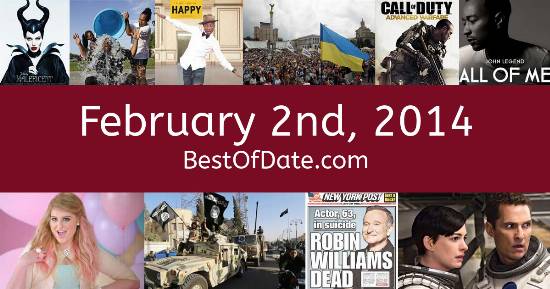 Songs that were on top of the music singles charts in the USA and the United Kingdom on February 2nd, 2014:

The date is February 2nd, 2014 and it's a Sunday. Anyone born today will have the star sign Aquarius. Currently, people are enjoying their weekend.

In America, the song Timber by Pitbull featuring Kesha is on top of the singles charts. Over in the UK, Rather Be by Clean Bandit featuring Jess Glynne is the number one hit song. Barack Obama is currently the President of the United States and the movie Ride Along is at the top of the Box Office.

In the United Kingdom, David Cameron is the current Prime Minister. A social networking website called Vine is extremely popular at the moment. A new Internet meme called "Doge", which consists of an image of a Shiba Inu dog with broken English written on it, is being shared online at the moment.

It is 2014, so the music charts are being dominated by artists such as Pharrell Williams, Katy Perry, John Legend, Iggy Azalea, Meghan Trainor, Lorde and Jason Derulo. Tributes are currently pouring in for Oscar-winning actor Philip Seymour Hoffman, who has died following a drug overdose. The Seattle Seahawks have just won the Super Bowl after defeating the Denver Broncos at the MetLife Stadium in New Jersey

People are watching popular TV shows such as "How I Met Your Mother", "The Walking Dead", "Black Mirror" and "Orange Is the New Black". Meanwhile, gamers are playing titles such as "Tomb Raider", "Tom Clancy's Splinter Cell: Blacklist", "Assassin's Creed IV: Black Flag" and "Rust". Kids and teenagers are watching TV shows such as "Curious George", "Jessie", "Austin & Ally" and "Paw Patrol".

Who was the Prime Minister of the United Kingdom on February 2nd, 2014?

Enter your date of birth below to find out how old you were on February 2nd, 2014.

Looking for some nostalgia? Here are some Youtube videos relating to February 2nd, 2014. Please note that videos are automatically selected by Youtube and that results may vary! Click on the "Load Next Video" button to view the next video in the search playlist. In many cases, you'll find episodes of old TV shows, documentaries, music videos and soap dramas.

Here are some fun statistics about February 2nd, 2014.