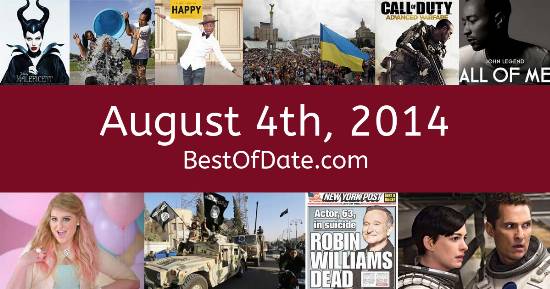 Songs that were on top of the music singles charts in the USA and the United Kingdom on August 4th, 2014:

The date is August 4th, 2014 and it's a Monday. Anyone born today will have the star sign Leo. It's summer, so the temperatures are warmer and the evenings are longer than usual.

In America, the song Rude by Magic! is on top of the singles charts. Over in the UK, Crazy Stupid Love by Cheryl Cole featuring Tinie Tempah is the number one hit song. Barack Obama is currently the President of the United States and the movie Guardians of the Galaxy is at the top of the Box Office.

An activity called the "Ice Bucket Challenge" is currently going viral on social media at the moment. The activity, which is being done to promote awareness of ALS, involves someone having a bucket of ice water dumped over their head. The Ebola virus epidemic in Western Africa has been receiving around-the-clock news coverage. On TV, people are watching popular shows such as "Glee", "Community", "Suits" and "Black Mirror".

Meanwhile, gamers are playing titles such as "Saints Row IV", "Grand Theft Auto V", "Batman: Arkham Origins" and "Battlefield 4". Kids and teenagers are watching TV shows such as "Curious George", "Jake and the Never Land Pirates", "Sheriff Callie's Wild West" and "Henry Danger". If you're a kid or a teenager, then you're probably playing with toys such as "The Wii U", "PlayStation 4", "Xbox One" and "Frozen dolls".

National holidays and famous events that fall on the 4th of August:

Who was the Prime Minister of the United Kingdom on August 4th, 2014?

Enter your date of birth below to find out how old you were on August 4th, 2014.

Looking for some nostalgia? Here are some Youtube videos relating to August 4th, 2014. Please note that videos are automatically selected by Youtube and that results may vary! Click on the "Load Next Video" button to view the next video in the search playlist. In many cases, you'll find episodes of old TV shows, documentaries, music videos and soap dramas.

Here are some fun statistics about August 4th, 2014.