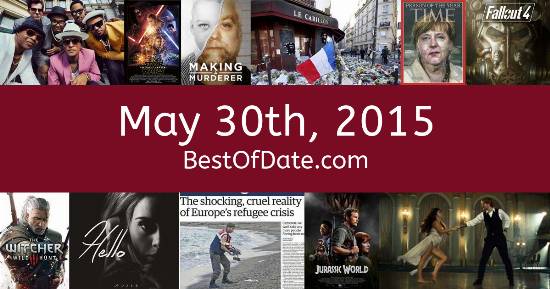 Songs that were on top of the music singles charts in the USA and the United Kingdom on May 30th, 2015.

The date is May 30th, 2015 and it's a Saturday. Anyone born today will have the star sign Gemini. Currently, people are enjoying their weekend.

Barack Obama is currently the President of the United States and the movie Tomorrowland is at the top of the Box Office. In the United Kingdom, David Cameron is the current Prime Minister. A social networking website called Vine is extremely popular at the moment.

It's 2015, so the music charts are being dominated by the likes of OMI, Bruno Mars, Ellie Goulding, Adele, Justin Bieber and Hozier. The reality TV show "19 Kids and Counting" has just been cancelled. The cancellation comes in the wake of recent reports that one of the show's main stars, Josh Duggar, molested underage girls when he was younger. Ireland has just voted to legalize same-sex marriage.

In soccer, English side Arsenal have just won the FA Cup after thrashing Aston Villa 4-0. On TV, people are watching popular shows such as "Homeland", "American Horror Story", "Orange Is the New Black" and "Jane the Virgin". Meanwhile, gamers are playing titles such as "Destiny", "Alien: Isolation", "Call of Duty: Advanced Warfare" and "The Witcher 3: Wild Hunt".

Children and teenagers are currently watching television shows such as "Phineas and Ferb", "Doc McStuffins", "Dog with a Blog" and "Nicky, Ricky, Dicky & Dawn". Popular toys at the moment include the likes of the PlayStation 4 and the Xbox One.

Notable events that occurred around May 30th, 2015.

Celebrities, historical figures and notable people who were born on the 30th of May.

Barack Obama was the President of the United States on May 30th, 2015.

David Cameron was the Prime Minister of the United Kingdom on May 30th, 2015.