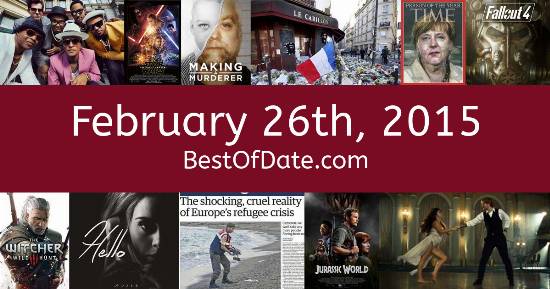 On February 26th, 2015, the following songs were at the top of the music charts in the USA and the UK.

The top "Box Office" movie on this date was the film "Fifty Shades of Grey".

The date that really showcased what was to come and who would have thought the divisiveness over the color of a dress would further fuel the political and social issues.
Posted on May 13th, 2022 16:42

The date is February 26th, 2015, and it's a Thursday. Anyone born today will have the star sign Pisces. In America, the song Uptown Funk by Mark Ronson featuring Bruno Mars is on top of the singles charts.

Over in the UK, Love Me like You Do by Ellie Goulding is the number one hit song. Barack Obama is currently the President of the United States, and the movie Fifty Shades of Grey is at the top of the Box Office. In the United Kingdom, David Cameron is the current Prime Minister.

A social networking website called Vine is extremely popular at the moment. It's 2015, so the music charts are being dominated by the likes of OMI, Bruno Mars, Ellie Goulding, Adele, Justin Bieber and Hozier. In Ireland, the trial of architect Graham Dwyer for the murder of Elaine O'Hara is currently receiving widespread media attention.

The 2015 Cricket World Cup is taking place in Australia and New Zealand. Meanwhile, the sitcom "Two and a Half Men" has come to an end after nearly 12 years. Eddie Redmayne has just won the Academy Award for Best Actor for his role of Stephen Hawking in the movie The Theory of Everything.

Pop star Madonna is in the news after falling off stage while performing at the 2015 Brit Awards. A photograph of "The Dress" has become a viral Internet sensation as people argue over whether the dress is colored "black and blue" or "white and gold". If you were to travel back to this day, notable figures such as Sawyer Sweeten, Ben E. King, B.B. King and Jules Bianchi would all be still alive.

On TV, people are watching popular shows such as "American Horror Story", "Black Mirror", "Rick and Morty" and "Gotham". Meanwhile, gamers are playing titles such as "The Sims 4", "Destiny", "Far Cry 4" and "Resident Evil HD Remaster". Kids and teenagers are watching TV shows such as "The Fairly OddParents", "Dog with a Blog", "Every Witch Way" and "Henry Danger".

If you're a kid or a teenager, then you're probably playing with toys such as Rainbow Loom, the Furby Boom, the PlayStation 4 and the Xbox One.

These are trending news stories and fads that were prevalent at this time. These are topics that would have been in the media on February 26th, 2015.

Check out our personality summary for people who were born on February 26th, 2015.

Television shows that people were watching in February, 2015.

Popular video games that people were playing in February of 2015.

If you are looking for some childhood nostalgia, then you should check out February 26th, 2021 instead.

Israeli Prime Minister. Deceased
Born on February 26th, 1928
He was not alive on this date.

Singer. Deceased
Born on February 26th, 1932
He was not alive on this date.

Barack Obama was the President of the United States on February 26th, 2015.

Enter your date of birth below to find out how old you were on February 26th, 2015.
This information is not transmitted to our server.

Here are some fun statistics about February 26th, 2015.