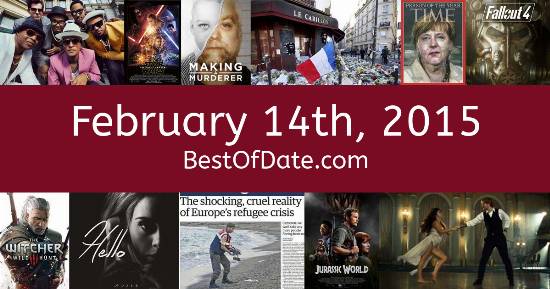 Songs that were on top of the music singles charts in the USA and the United Kingdom on February 14th, 2015.

The movie "The SpongeBob Movie: Sponge Out of Water" was at the top of the box office on February 14th, 2015.

The date is February 14th, 2015 and it's a Saturday. Anyone born today will have the star sign Aquarius. Currently, people are enjoying their weekend.

It's Valentine's Day, so couples are exchanging cards and going out to dinner together. In America, the song Uptown Funk by Mark Ronson featuring Bruno Mars is on top of the singles charts. Over in the UK, Love Me like You Do by Ellie Goulding is the number one hit song.

Barack Obama is currently the President of the United States and the movie The SpongeBob Movie: Sponge Out of Water is at the top of the Box Office. In the United Kingdom, David Cameron is the current Prime Minister. A social networking website called Vine is extremely popular at the moment.

It's 2015, so the music charts are being dominated by the likes of OMI, Bruno Mars, Ellie Goulding, Adele, Justin Bieber and Hozier. In Ireland, the trial of architect Graham Dwyer for the murder of Elaine O'Hara is currently receiving widespread media attention. Ivory Coast have just won the "2015 Africa Cup of Nations" after defeating Ghana 9-8 on penalties.

NBC news anchor Brian Williams has been suspended following revelations that he exaggerated the details of a helicopter attack in the Iraq War. The 2015 Cricket World Cup is taking place in Australia and New Zealand. If you were to travel back to this day, notable figures such as Ben E. King, B.B. King, Jules Bianchi and Cilla Black would all be still alive.

On TV, people are watching popular shows such as "Prison Break", "The Big Bang Theory", "RuPaul's Drag Race" and "Homeland". Meanwhile, gamers are playing titles such as "Watchdogs", "The Sims 4", "Alien: Isolation" and "Assassin's Creed: Unity". Children and teenagers are currently watching television shows such as "Glee", "Jake and the Never Land Pirates", "Doc McStuffins" and "Sheriff Callie's Wild West".

Popular toys at the moment include the likes of Rainbow Loom, the Furby Boom, the PlayStation 4 and Frozen toys.

Wrestler. Deceased
Born on February 14th, 1971
He was not alive on this date.

Barack Obama was the President of the United States on February 14th, 2015.

David Cameron was the Prime Minister of the United Kingdom on February 14th, 2015.

Enter your date of birth below to find out how old you were on February 14th, 2015.

Here are some fun statistics about February 14th, 2015.