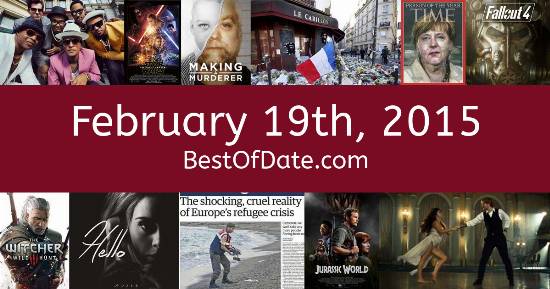 Songs that were on top of the music singles charts in the USA and the United Kingdom on February 19th, 2015.

The date is February 19th, 2015 and it's a Thursday. Anyone born today will have the star sign Pisces. Valentine's Day of 2015 has just passed.

In Ireland, the trial of architect Graham Dwyer for the murder of Elaine O'Hara is currently receiving widespread media attention. The 2015 Cricket World Cup is taking place in Australia and New Zealand. Meanwhile, the sitcom "Two and a Half Men" has come to an end after nearly 12 years.

If you were to travel back to this day, notable figures such as Ben E. King, B.B. King, Jules Bianchi and Cilla Black would all be still alive. On TV, people are watching popular shows such as "Game of Thrones", "Black Mirror", "Peaky Blinders" and "Better Call Saul". Meanwhile, gamers are playing titles such as "Watchdogs", "Destiny", "Call of Duty: Advanced Warfare" and "Dying Light".

Children and teenagers are currently watching television shows such as "Jessie", "Lab Rats: Bionic Island", "Girl Meets World" and "Nicky, Ricky, Dicky & Dawn". If you're a kid or a teenager, then you're probably playing with toys such as the Furby Boom, the PlayStation 4, the Xbox One and Frozen toys.

American actor. Deceased
Born on February 19th, 1924
He was not alive on this date.

Barack Obama was the President of the United States on February 19th, 2015.

David Cameron was the Prime Minister of the United Kingdom on February 19th, 2015.

Enter your date of birth below to find out how old you were on February 19th, 2015.

Here are some fun statistics about February 19th, 2015.